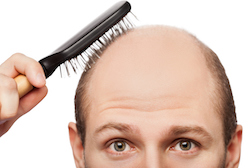 Lawsuits against Merck & Co., the maker of Propecia, have been filed in the US and Canada, alleging that the medication causes serious side effects, including a risk of sexual dysfunction and mental and emotional problems. Plaintiffs allege in lawsuits that Propecia long-term side effects such as sexual dysfunction, insomnia and emotional symptoms persisted for years, even after they stopped taking Propecia.

The study Characteristics of Men Who Report Persistent Sexual Symptoms After Finasteride Use for Hair Loss, which was published in December 2016 in The Journal of Clinical Endocrinology & Metabolism, focused on three groups of men: finasteride users who reported persistent sexual problems after discontinuing finasteride; age-matched finasteride users who did not report sexual symptoms and healthy men who had never used finasteride.

Results of the study conducted at Boston's Brigham and Women's Hospital by a team of 19 clinical researchers showed that the former finasteride users group had impaired sexual function, higher depression scores, a more negative affectivity balance and more cognitive complaints than the men in the other two groups.
According to the study: "As sexual function worsened. . . there was increasing activity in the neural circuits corresponding to sexual arousal and decreasing activity in brain regions associated with higher level cognitive and motivational networks in symptomatic finasteride users in response to erotic stimuli. This dissociation in activity may be a marker of neural changes post-finasteride use."

More PROPECIA News
The experiments suggest that there are "underlying neurobiological abnormalities in symptomatic finasteride users, which can be linked to circuitry that has been implicated in both depression and in sexual arousal," according to the study.