Not only are Propecia side effects debilitating, they also cause long-term psychological problems. “Taking Propecia has been a huge handicap and embarrassment in my intimate relationships, causing further emotional and mental distress,” says Kevin. 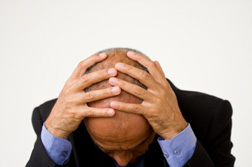 Although Merck, the manufacturer, warns of some Propecia sexual dysfunction on its label, it also says those side effects are temporary and will go away when the drug is discontinued. Unfortunately, those side effects didn’t go away in Kevin’s case (not his real name).

“I started taking Propecia in the mid-1990s, just after it was approved by the FDA, and almost immediately I started feeling pain in my testicles,” says Kevin. “The pain got so bad that I wound up in the emergency room one night. I figured it was linked to Propecia because there was no other explanation, but the doctor said he had never heard of this side effect so I continued to take it.”

Kevin continued taking Propecia for several months but the pain got worse and he started to experience a decrease in his sex drive, so he discontinued it.

“I have since suffered from sexual dysfunction such as erectile dysfunction and decreased libido,” he adds. “I feel like I have been duped by the drug company and I feel foolish for letting my ego get in the way of my health. To think I could have avoided all these problems if I wasn’t worried about a little hair loss…”

To make matters even worse, Kevin says he didn’t even see any improvement regarding the hair loss treatment.

Steve’s doctor believed Merck: he told Steve that his Propecia sexual dysfunction problems would go away when he stopped taking the drug. That was 10 years ago.

More PROPECIA News
“I only took Propecia for a few months before I noticed an issue with my sex drive,” says Steve. “Some time later I noticed that my testicles had shrunk and they were painful. And I had a lower ejaculate. I went back to my doctor and he still assured me that everything would wear off. Wrong. I went to another doctor and asked how my testicles could shrink but he said that was impossible. But I would know!”

Steve says he continues to have Propecia side effects. And he hasn’t been able to maintain a relationship because of it.

Kevin and Steve are just two of about one million men in the US alone who have been prescribed Propecia for hair loss treatment. As of March 2014, according to court documents, 740 cases are pending in the Propecia Multidistrict Litigation (U.S. District Court, Eastern District of New York, MDL 2331 - IN RE: Propecia-Finasteride Products Liability Litigation). Plaintiffs allege that Merck failed to warn on Propecia side effects that could cause permanent and devastating sexual dysfunction.