PPH & Fen-Phen Lawsuit: "Can I Still Make a Claim?"

Gwen, a registered nurse, started taking Fen-Phen and Redux in 1993 to lose weight. Neither diet drug worked; instead she was diagnosed with mitral valve regurgitation and now she is concerned that it could lead to Primary Pulmonary Hypertension (PPH).

"I had about 40 lbs to lose so I first took Fen-Phen for about six months then I switched to Redux for about two months," says Gwen. "It wasn't until 2002 that my friend suggested that I join a class action against the diet drugs (she was also taking Fen-Phen) but I was perfectly fine—I was playing softball twice a week and felt good. 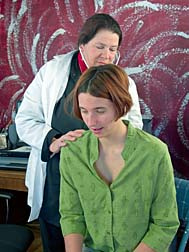 Even though I didn't lose any weight, I was only 42 and in pretty good shape. But it got harder to run from 1st to 2nd base. It just got worse — running from home plate to 3rd base, I thought I was going to die; I was so out of breath.

By now I'm thinking ohmigod, I really have to lose weight, this is taking me down. My friend told me again about the law suit and said that this was the last year to opt in so our attorney told us that we needed to get tested. We both went to the cardiologist and I was shocked when he told me that I had a mild to moderate mitral valve regurgitation. (I was worried because, being a critical care nurse, I am thinking of the future—I've seen the damage done to others.) The cardiologist wanted to see me every six months and my attorney assured me that I could claim some damages. (Turns out that my friend was fine…)

I was thinking that I would rather have my health than go through this. I signed up to join the class action and one year passed before I contacted the attorney to find out what was going on with the suit. But by this time, Judge Harvey Bartle stepped in to re-organize the settlement process due to so many fraudulent claims.

Two more years passed and a settlement was reached. The attorney kept telling me I was going to get compensated. Then I had an annual echo-cardiogram and the cardiologist told me that my regurgitation had progressed from mild to severe and I now had moderate aortic insufficiency. He prescribed an ace-inhibitor: that would decrease the pre-load of blood going into the heart before it contracts so the force you have to pump is less. This means that the valve is not stressed and won't dilate, which would, over time, require a new valve.

Then Katrina came. Several months after the hurricane, I contacted the same attorney—he was now based in California. Again, I got the same run-around. Finally in late 2006, he informed me that he wasn't practicing law in Louisiana and was moving to California so I should get my file from his office. (Coincidentally, three months before that, I complained about him not doing anything with my case to the LA state bar association.)

When I got my file, there was a correspondence from the trust to this attorney, saying I wasn't eligible because "the screening period ended on January 3, 2003". My first echo-cardiogram was done on January 17, 2003.

More News
But this is what happened that caused me to miss a deadline that I never even knew existed: In November, the attorney sent me to the cardiologist. My initial appointment with the cardiologist was booked for November, 2002 but his office called to reschedule—they were overbooked. Not knowing about this deadline, I agreed to reschedule in January.

So this is my issue: Why do I lose my rights to sue for taking a defective product? Why don't I have a right?

I wrote a letter to Judge Bartel and summarized everything that happened, just as I told you. Then I looked for another attorney on the internet. An attorney in Florida returned my call and another in Philadelphia. Both said they have a working relationship with this trust but I have hit a dead end.

I am now praying to give me acceptance for what I can't change. Right now I think I am basically screwed unless I find the right lawyer because I am really concerned that my health is going to decline, that I am going to wind up with PPH. God knows, I see enough of it in my workplace."

Posted by
laura Fraley
on July 5, 2015
After taking phen,phen ,years later I started loosing my breath ,went and got checked out,now I have a aorit insufficiency,and am goin to have heart surgery. Wish I could sue them.Have to watch lawers ,2 of them are in prison now for stealing the settlement money,The 3rd laser said he was drunk and didn't knew what he was doing.In Covington NY.Itstrue,look it up!!!
Posted by
Don Yaw
on April 13, 2015
I was put on a Phen Fen diet back in 1989 by a very respected Dr. I weighed 390lbs at the time and he was trying many different diets. I was on Phen Fen for approx 9 months when he discovered that this could cause many different conditions. My condition was Renal Stage IV or V and I was immediately put on dialysis and high blood pressure meds. I had been on Dialysis for well over four years waiting for a Kidney Transplant. I received a kidney from a cadaver in June of this year. I have also been hospitalised 5 five times foe renal rejectionI would like to know if I can put in a claim, or am I like every other vet, S,B & TATOOED.... Thanks for listening to my storey.....
Posted by
Dolly Murphy
on October 27, 2014
I filed back in 2001 or 2002 with Golf water attorney. My claim was denied now at the age of 47 I had a aortic dissection and plumatory hypertension. I took the fenfen
Posted by
WILLIAM F. MCLAURIN
on March 25, 2014
I didn't know about a Lawsuit. I took the drug back in 94 or back in 97. I know I took this Drug PHEN PHEN. I've had open heart surgery for Aortic Aneurysm. I had to have a Aortic Valve replaced. Aug 10 2011 3 months after that surgery, I was not able to walk. Well I lost the strength in my lower body. I first started having chest pain in1999. The first time I notice my heart was really not right, was in 2006. I was driving, I thought I was dying. I went to the hospital they keep me , and told me I was in Atrial Fibrillation, and they had shock my Heart back into Rhythm . I had this done 2 or 3 more time's later before my Aortic Aneurysm surgery. I really do need to know if this was the cause of my HEART CONDITION.
Posted by
Rondalyn Chesnut (Formally Jones)
on August 15, 2012
I had sent in all my paperwork back in the Early part of the lawsuit. Went through a divorce and moved to AZ. Now I am wondering if there is anything for me to claim, or who do I call about disbursments. Thank you
Posted by
Yvonne Casity
on August 8, 2012
Hi, I just found out that I have a heart condition and I need a valve replacement. I took Fen-Phen for 6 months back in 97 and didn't know about any deadlines for filing. It is very frustrating to know that because I had slow progression of problems that I don't have a case against the company that made Fen-Phen. I would like to know what my recourse is?
Posted by
Judy
on July 10, 2012
My mitral valve regurgitation developed after taking redux. I did get in on the class action suit. At the time I had mild mvr. I received around $6000, but still had the option of filing if got worse. In late 2011, my mvr had progressed to moderate with other symptoms. In January I called the class action lawsuit number and was told that I was too late. I had to have had the operation by the end of December 2011. It did not matter that I had just had the echo. I am sure there will be more people like me who had a slow progression.
Posted by
Arlean Virginia Jenkins
on January 4, 2011
My name is Jack Jenkins, I am writing this for my wife who died on Oct. 3rd 2010, never knowing why she never heard anything about what happened with the lawsuit. She had her name in back in the 90's so it was not like she missed any dead lines. Someone sent mail one time asking if she would be willing to settle for $6.000 she responded that she would because she figured that was better then nothing which is exactly what it turned out to be, nothing. She never got any $6.000 or even heard anything more about it and that has been 12 years or more. I think they did her wrong and now she is gone and will never know what went wrong with the whole stinking mess. She deserved better then that. The least you could have done was let her know it was settled and she was not receiving anything. You owed her that much. Husband- Jack Jenkins
[Editor's Note: LawyersandSettlements.com was not involved in or affiliated in any way with the Fen-Phen settlement; a Claims Administrator for the Fen-Phen lawsuit would handle claimant notifications and distribution of settlement funds.)