GlaxoSmithKline has agreed to pay $750 million and will plead guilty to a criminal charge, putting an end to an investigation into the company's Paxil manufacturing plant in Puerto Rico. Although Paxil side effects including Paxil birth defects have been in the news, the charges in this lawsuit involved claims that Paxil tablets manufactured at the plant were improperly made. 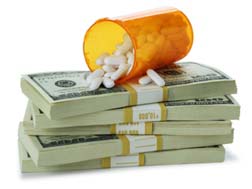 The lawsuit was started by an employee who acted as a whistleblower by alerting investigators to problems with how the tablets were manufactured. The improperly made pills were manufactured between 2001 and 2005, according to The Wall Street Journal (10/27/10). The whistleblower is now entitled to $96 million from the settlement.

An investigation into GlaxoSmithKline's plant in Cidra, Puerto Rico, found that between 2001 and 2005, some tablets had improper amounts of the active ingredient. Furthermore, some tablets were prone to splitting apart. Although there was no evidence of any injury to patients, investigators filed charges, saying companies must follow the rules.

GlaxoSmithKline was alleged to have knowingly manufactured, distributed and sold medications that fell below strength, quality and/or purity standards set by the FDA.

More PAXIL BIRTH DEFECTS News
In addition to Paxil CR, other drugs included in the settlement were Kytril, an anti-nausea medication, Bactroban, a medication used for skin infections, and Avandamet, a diabetes medication. The plant in Puerto Rico has been closed down.

As part of the settlement, GlaxoSmithKline will pay $150 million in fines and forfeitures and a $600 million civil settlement under the False Claims Act. Various states will receive payouts from the settlement.

Earlier this year, GlaxoSmithKline reportedly agreed to settle certain lawsuits alleging Paxil was responsible for birth defects in babies exposed to the antidepressant prior to birth. According to reports, GlaxoSmithKline agreed to pay more than $1 billion to settle approximately 800 Paxil birth defects claims. The drug manufacturer has not commented on a report announcing the settlement. The company did announce that it had reached an agreement to settle certain cases but that the details of those settlements were confidential.

If you have suffered losses in this case, please send your complaint to a lawyer who will review your possible [Paxil Birth Defects Lawsuit] at no cost or obligation.
Request Legal Help Now