Allison was a general manager in the hospitality industry when new ownership eliminated her job. Six months later she is still fighting to receive $13,000 in overtime pay her contract guaranteed.

"There was a corporate takeover on January 31, 2008," says Allison, "and the VP of Fallbrook Hospitality was removed from his position. The majority stockholders decided they could run the hotel themselves and informed me that I could either be demoted, become a desk clerk and have my pay cut or I could leave. 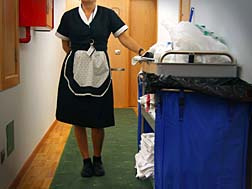 So when I left, I asked for my incentive pay that was due to me every month. They kept saying they didn't have the money and could I wait another month, which I did, but they came back and said they weren't giving it to me. I also did not get my holiday, personal and vacation pay, even though I wasn't allowed to take vacation.

I had to use an attorney to help me get my final pay cheque, as did another of my former employees, because we refused to sign papers that said this was our last pay check when they still owed us money. I did manage to get that final check but not the overtime owed. They owe me $13,000.

I am also acting on behalf of my former employees. They have contacted me because they can't get their overtime pay and when their time is being figured, if they work, for example, until 3:15 they are only paid until 3:00. Payroll doesn't figure in the minutes, strictly the hours.

More OVERTIME News
Our state employment law states that if a person is not on a salary basis and works overtime, they have to be compensated one and a half times the rate. And, if they are salaried, they are due at least the basic salary requirements every week.

I myself was on salary, which is why I get the extra $1000 a month incentive pay; it is part of my employee package. I have a letter from my former Vice President saying I am entitled to that money. But the new owners say they know nothing about the entitlement--even though they have paid me twice for it.

My main thing is that they treat people crappy and think they can get away with it. But in reality, and from my experience of 18 years in management, state laws are employer-friendly not employee-friendly, except in California.

The majority of the employees have quit but six are still there and we have joined together and found an attorney who will take the overtime case and file a class action suit."