How many class action lawsuits and subsequent settlements will it take for call centers to pay their employees overtime? Just last week a class action suit was filed by a former State Farm claims processor from Columbia, alleging the insurance company required telephone-dedicated workers to work overtime without pay. 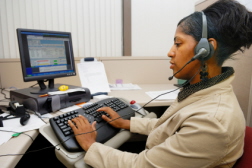 Federal labor law typically requires employees—including call center customer service representatives and telemarketing and sales employees (unless they are exempt)—to be paid overtime pay at a rate of not less than one-and-a-half times an employee's regular rate of pay after 40 hours of work in a workweek.

Lisa Nobles, the plaintiff in the State Farm suit, worked at the State Farm operations center in Columbia from 2005 to June of this year. According to Columbia attorney Brad Lear, she and other call center employees were expected to arrive at their desks before their paid shifts started to log into their computers, read and respond to work-related e-mails and do other pertinent tasks to make sure they were ready to make and take phone calls when their shifts began.

So why did Nobles wait five years to file a complaint? Her attorney believes that in most cases employees don't know their rights. "They also don't realize the significance of the lost earnings until those wages have accumulated," he said.

In Noble's case, that's a big chunk of change.

Lear estimated more than 1,000 workers at the Columbia call center were affected by the alleged overtime practice. And it's not the first time a similar suit has been filed in Columbia. In 2009, CenturyTel call center employees claimed they were not paid overtime. The employees reached a court-approved settlement and back pay was issued.

Perhaps State Farm has deep pockets, believes it is above the law, or is in denial of overtime violations. It may have done well to take a look at similar hour and wage lawsuits against Century Tel or APAC Customer Services, Inc. The APAC suit, filed May 2009, was brought by plaintiff Tiffany Sharpe for alleged violations of federal and state overtime compensation laws.

More OVERTIME News
The suit claimed that APAC consistently violated federal and state wage and hour laws by failing to accurately record all time worked or to pay earned wages and overtime for employees at its La Crosse, Wisconsin facility. Examples of the unlawful practices include requiring employees to work "off the clock" by not paying for work performed pre-shift, post-shift, and over unpaid meal breaks. These tasks involve such activities as booting up computers, logging on to APAC's network, opening relevant computer programs, reviewing company memoranda and e-mail, and completing other essential tasks.

In January 2010 the United States District Court for the Western District of Wisconsin granted conditional certification to a class of all telephone dedicated customer service representatives employed by APAC.

If you were employed as a call center customer service representative, telemarketer, sales rep or other call center employee and you believe that you have not been paid all of the overtime pay, hourly wages, salary and other benefits that you believe you are owed, know your rights and seek a wage and hour attorney's advice. And remember, retaliation is also a labor law violation.

Posted by
Theresa
on March 23, 2016
The attorneys for the big insurers will always be able to keep a step ahead of the future likelihood for these issues. Bright minds have dubbed the practice "labor laundering." Gone are more and more of the Employees as the large corps. contract work out to Third Party Vendors and Captive Agents. Who does the work? The employees of the Contractors and Agents whose wages and benefits are controlled by the smaller entity, not the large corp. These smaller Vendors and Agents are still tightly controlled by the larger entity under contract law regarding marketing, sales, etc. but not a lot of direction about whom the Agents employ or their compensation. Assuredly, it is not at the level where it was with Corp. Nothing new, especially post 2008, just becoming more prevalent. I know as I work for a small captive insurance agency, and have noticed increasing customer service workload as the larger insurer reorganizes, increases use of software, and whittles the Employee roles. I used to work for the large insurer, albeit, pre-2008. Apples and Oranges.
Posted by
robin harris mcgill
on July 4, 2013
I worked for State Farm Oct 1997 to April 2009 I was paid min wage for my overtime or not paid at all