Davida Godett woke up one morning to find her entire left side numb and her vision blurred. She had suffered a mini-stroke. She was also on the Ortho Evra Patch. "I was on the Patch for a few years until the Emergency Room doctors told me to rip it off," she says. 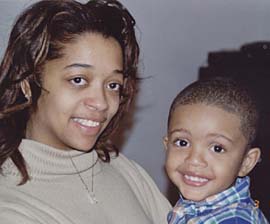 "My partner drove me to the hospital and believe me, I was scared. They rushed me into ER and did a 24-hour stroke work-up that included a MRI and ultrasound of my heart, CAT Scan, the works. The concluded I had a TIA or min-stroke.

(Godett's stroke stunned her community: On May 6, 2007 the [Philadelphia Inquirer] reported on her stroke and the American Stroke Association's "Power to End Stroke" initiative.)

"The doctor in ER asked me what meds I was on. I was only on the Ortho Evra patch; I don't smoke or drink. I am 5' 7' and 132 pounds and African-American. At the time I was 30 years old and in really good shape. I had no other conditions to predispose a stroke, nor is there anything like high blood pressure or diabetes in my family.

A doctor in ER told me I could never take the [Ortho Evra patch] or any kind of birth control pill again. He explained that the amount of hormones fluctuating in my body could cause another stroke. The hospital also sent letters to my gynecologist saying I cannot have any extra hormones in my body due to heightened estrogen levels.

Of course I never used the patch or the pill again. But the second stroke occurred on Valentine's Day of this year. I can't remember a lot because it has affected my memory. I was outside shoveling snow and I thought I had pulled a muscle -- my body didn't feel right and my left arm was aching. At the time I was working from home (I am an accountant). I went to work the next morning and my arm felt worse. I called my neurologist and explained my symptoms -- he urged me to come in right away and my mother drove to the hospital. On the way there, my speech began to slur and when I got to ER, they did a few more tests and concluded that I had suffered a full-blown stroke.

This one really scared me. My son needs a Momhe -- is was only three years old. I didn't know why it was happening. When I had my first stroke I took one week off work but since the 'Big One', I have been on disability; I just hope I can go back to work eventually.

More News
In December 2006 I started to work with the American Stroke Association. Because of my build and physical features it doesn't look like I had a stroke so I am one of their ambassadors and speak publicly on behalf of the association. I also discovered this frightening statistic: Once you have a mini-stroke, you have a 35 percent chance of having another stroke.

Now I have to take Plavix and Topamax for the rest of my life. I am terrified that I will have another stroke. But I know all the signs of a stroke and I am really conscious of the things I do. I get exhausted easily and my memory has suffered -- not good for the mother of a four-year-old."

LawyersandSettlements.com will be checking back in with Davida periodically and we wish her a speedy recovery.

If you have or a loved on has suffered from blood clots, heart attack or stroke, while using Ortho Evra, please contact a lawyer involved in a possible [Ortho Evra Contraceptive Patch Lawsuit] who will review your case at no cost or obligation.
Request Legal Help Now