At least 100 lawsuits have been filed against Ortho-McNeil, the manufacturer of the Ortho Evra patch, alleging that the company knew about the risks associated with using the patch but did not properly warn consumers.

One such lawsuit was filed on behalf of a Florida woman who developed a blood clot in her leg four months after she started using the Ortho Evra patch. And more lawsuits are being filed, especially since new concerns are being raised about the risks associated with using the Ortho Evra birth control patch. The concerns are serious enough that at least one ob-gyn group has stopped prescribing the patch for patients and others are encouraging patients to use other birth control methods. So far, the deaths of 23 women have been linked to Ortho Evra, although there may be more deaths or injuries that have not been reported. 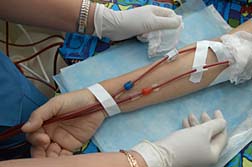 Some doctors are still prescribing Ortho Evra, but are doing so while warning their patients of the risks and recommending other options. Other doctors have sent warnings out to their patients via mail, informing them of a study that found a link between Ortho Evra and DVT.

In 2005, a study conducted by the U.S. Food and Drug Administration (FDA) and released by the Associate Press, showed that women who used the Ortho Evra birth control patch were three times more likely to develop blood clots than women using a birth control pill.

A main concern with the Ortho Evra patch is that women who use it are exposed to 60 percent more estrogen than women who use a birth control pill. Increased estrogen exposure can result in an increased risk of blood clots, which can be fatal.

The Ortho Evra patch has been linked to deep vein thrombosis (DVT) a condition that can result in death. DVT is an ailment in which a blood clot develops in a deep vein, usually in the legs. The clot can break loose and travel to the lungs via the bloodstream, leading to a pulmonary embolism.

More News
Of the 23 women who died, 12 died from severe blood clots and five died of either heart attacks or strokes. One of the women who died was an 18-year-old college student who suffered from headaches, dizziness, and leg pain. She had actually developed a blood clot that moved to her lung. In another case, a 14-year-old girl used Ortho Evra for only eight weeks before she developed blood clots in her pelvis and died.

Many more women have developed blood clots but caught the clots in time to treat them. In a 17-month period, the FDA received over 9,000 reports of negative reactions to Ortho Evra. In comparison, there were only 1,237 reports of negative reactions to Ortho Tri-Cyclen in a six-year period despite Ortho Tri-Cyclen having six times as many users as Ortho Evra.

Women who are on the patch are strongly advised against smoking. Furthermore, women who have blood clots should not use Ortho Evra.

If you have suffered a stroke, heart attack, or blood clot as a result of using the Ortho Evra patch, you may be eligible for compensation. Contact an [Ortho Evra] lawyer to discuss your options.
Request Legal Help Now