Beth looked after her brother for two years before placing him in a nursing home—he suffered from dementia. But he got worse and Beth wanted to bring him home. The nursing home said he could only be transferred to another home—one of theirs. Her brother was another victim of nursing home abuse.

"I put Bernard in a nursing home in 2005," says Beth. "He was a very successful child psychologist but got dementia at 54 years old." Beth says that the most difficult problem was his toilet issues: sometimes he didn't realize that he wasn't in the bathroom—he wasn't aware of his surroundings. But that was a far cry from needing restraints...

"A few days after I checked him in, the nursing home put him in restraints," says Beth. "They said he hit somebody. He did have a bit of a temper and he was probably frustrated; he tried to chew his way out of the restraints and even chewed his arm. I was given a $200 bill to replace linens that he chewed. 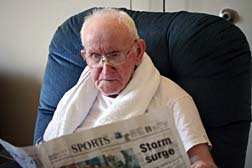 "They called me when they put the restraints on him; I didn't know what to do; it was so sad. His health deteriorated quickly after that and my major concern was to get him home; Bernard told me that he wanted to die at home.

They also put him on different drugs: they stopped his regular meds and prescribed other drugs to 'calm him down'. Could his frustration justify this action? It certainly didn't seem reasonable but I figured they knew what they were doing.

I went to a care conference at the nursing home and asked to bring my brother home but they said I couldn't care for him and that if I really wanted, I could transfer him to another nursing home. I got the impression that they were mad at me— they definitely didn't like the idea of losing a client. (Medical was footing the bill.)

More News
One month later, June 23rd 2006, my brother got very ill. I got a phone call from the home and they said he had pneumonia and they were transferring him to hospital. I called the hospital all day; his family called but we couldn't find him at the hospital. Apparently the transport company had dropped him off sometime in the morning and he was left in the hall until 6pm: they looked everywhere for Bernard but finally he was checked in as John Doe in the evening.

The nursing home sent him over without any paperwork, no identification, just his pajamas and slippers. The next afternoon we called and they finally figured out who he was.

My brother died July 2nd. He was only 60 years old and it was so sad that I couldn't bring him home. I went to caregiver support groups and I was also attending the family caregiver alliance classes. I am 58 and in good health and I was totally capable of looking after him. I could have easily handled him at home with the support and skills I had.

I suspect they kept him there for the money. They couldn't care less about him."