A new lawsuit has been filed, alleging a patient was harmed by the use of the Ethicon Physiomesh flexible composite mesh. The physiomesh lawsuit was filed in September 2016 by Joanne Quinn, who claims the makers of the mesh knew about the risks associated with the product but failed to properly warn consumers. While Physiomesh litigation is in early stages, the product was voluntarily withdrawn from the market in May 2016. 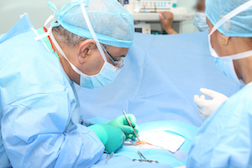 According to court documents filed in relation to her lawsuit (Quinn v. Ethicon Inc., case number 6:16-cv-1663, in US District Court, Middle District of Florida), on May 30, 2014, Quinn was implanted with the Ethicon Physiomesh flexible composite mesh to repair incisional hernias. Despite having the surgery, however, Quinn's health problems didn't improve. In fact, she alleges, they became worse. Quinn began experiencing persistent abdominal pain and bowel problems.

"Due to the severe adhesions to the bowels and abdominal wall caused by the defective Physiomesh, Dr. Nassif ended up spending over two hours during the surgery to remove the defective Physiomesh but was unable to remove all of the offending material," court documents state. As a result, the lawsuit alleges, Quinn will have pain and medical complications for the rest of her life.

Quinn argues that had she known about the risk of complications she would not have agreed to have the Physiomesh flexible composite mesh implanted. The lawsuit argues that Physiomesh flexible composite mesh has a high risk of unreasonable injuries and side effects. Among the alleged potential defects are an ability to harbor infections that jeopardize a patient's health; migration of the mesh from the location of implantation; and failure of the mesh to fulfill its purpose of implantation.

More SURGICAL MESH News
Plaintiffs in Physiomesh lawsuits allege the maker knew about the defects associated with the product but still marketed the product as safe.

In May 2016, Ethicon issued a voluntary withdrawal of its Phsyiomesh Flexible Composite Mesh. The withdrawal was announced after an analysis of unpublished data from two hernia registries that showed higher than average recurrence rates following laparoscopic ventral hernia repair. When it announced its voluntary withdrawal, Ethicon noted that the higher recurrence rates could be due to product characteristics, operative factors, and/or patient factors. The withdrawal affected the Flexible Composite Mesh and not the Physiomesh Open product.