It might be argued that an 86-year-old individual shouldn’t be spending his twilight years suffering debilitating pain and surgical mesh complications from an allegedly defective surgical product. But such is the fate of a Canadian man who alleges that Ethicon Physiomesh, which has been recalled by Health Canada, is responsible for his suffering. 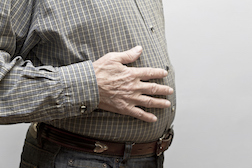 According to a report from the Canadian Broadcasting Corporation (CBC 06/05/17) in Dartmouth, Nova Scotia Eric Hagen went into Dartmouth General Hospital for a hernia repair procedure in 2012. According to court records Ethicon Physiomesh was used. The aforementioned mesh had been introduced in the US and Canada about two years prior, in 2010.

“The surgeon, she told me that she used the mesh,” Mr. Hagen said, in comments to the CBC, because at the time, “this is a new thing.” Hagen had suffered an abdominal hernia and the mesh was used in the repair. All seemed well until this past March, when Hagen was standing outside his home leisurely chatting with a neighbor.

That was in March. Then, in late May it flared up again. “I can’t describe it today in words how much it hurt,” he told the CBC. “I didn’t think anything could hurt that much.”

Hagen tells CBC that he historically has led an active life, taking care of his own home and helping his neighbors as much as he can. Now, he’s afraid he won’t be able to undertake for himself, let alone help others.

“Right now, I can’t look after myself,” he told the CBC.

At this juncture Hagen’s only intent in speaking out is to raise awareness. However, efforts are underway to certify a surgical mesh lawsuit as a class action on behalf of all patients in Canada who allege harm from Ethicon Physiomesh. A spokesperson with the sponsoring law firm, based in London Ontario, alleges that Physiomesh once implanted has the capacity to pull apart and / or move away from its initial insertion point within the abdomen, impacting nearby organs and other tissue – while no longer managing the hernia.

The mesh is inserted laparoscopically, by way of a small incision, and then deployed within the abdomen. Laparoscopic surgery is intended to reduce blood loss and speed healing.

And there are those who liked working with the product, including Dr. Alex Mitchell, head of surgery at Dartmouth General Hospital. “In truth I liked it,” Mitchell told the CBC. “It was easy to use. It was relatively easy to put in. The results were pretty good, the patient legitimately was comfortable.”

It should be noted that Mitchell was not the operating surgeon who performed the procedure on Hagen. However, while Hagen may have been comfortable and problem-free for five years, he isn’t now. And while at present he has no intention of joining a surgical mesh side effects lawsuit, there are plenty of others who are considering the option – especially in light of the fact Ethicon Physiomesh was voluntarily withdrawn by the manufacturer in the US, and recalled in Canada.

Ethicon is a subsidiary of pharmaceutical giant Johnson & Johnson. In early May of last year, Ethicon triggered a voluntary withdrawal of Ethicon Physiomesh from the US market after it discovered that Physiomesh was responsible for more surgical mesh complications and revision surgeries than competing products, the manufacturer said in an emailed statement to CBC News.

More SURGICAL MESH News
Health Canada, the federal regulator and the Canadian equivalent to the US Food and Drug Administration (FDA), recalled Ethicon Physiomesh later that month, in May 2016.

According to those conversant with the Canadian hernia patch lawsuit, it is estimated that some 30,000 patients in Canada have received the Ethicon Physiomesh in the six years it was on the market. The estimate is based on US data.

Dr. Alex Mitchell, the surgeon from Dartmouth, advocates that Physiomesh patients should not subject themselves to undue concern, especially if their hernia mesh is continuing to perform well without pain or surgical mesh complications. However, he told the CBC, any pain or ongoing symptoms originating from the site of the hernia repair should be duly reported to a family doctor.

“They should be alerted,” he said.
READ ABOUT SURGICAL MESH LAWSUITS

Posted by
Gabino Munoz
on August 20, 2017
Am still seeking legal representation. Have suffered numerous side effects including hospitalization, UTIs, intermittent but severe pain etc. Can you help or refer me to someone?