Colleen Copland feels that she is far too young, at age 34, to be dealing with surgical mesh side effects stemming from an implantation of the now-recalled Ethicon Physiomesh. A routine procedure to repair an abdominal hernia mushroomed into a nightmare for the Canadian woman, who along with one other sufferer interviewed by CTV News (03/28/17) back in the spring have joined a class action surgical mesh lawsuit in Canada. 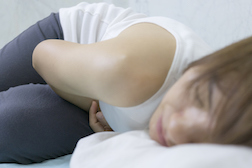 Copland’s Canadian doctor used Ethicon Physiomesh for her hernia repair. However, CTV News reported that not long after the surgery, the mesh was recalled and removed from the market altogether due to a high rate of surgical mesh complication. In the meantime – due in part to physiomesh side effects – Copland’s hernia has returned. Not only has the physiomesh failed, it remained as of March in her body and the source of innumerable problems.

Copland wanted it removed, and for good reason. “If I cough or sneeze, I have to hold my stomach,” she told CTV News. “It's a horrible pain, to be honest.”

Jacqueline Duchesne is another plaintiff in the class action hernia patch lawsuit in Canada who continued to suffer surgical mesh complications following her surgery. “The doctor said, ‘this product is not good. We don’t use it anymore,’” Duchesne told CTV. While Duchesne had the problematic Ethicon Physiomesh successfully removed, the pain didn’t go away and she’s stuck living with it. “I feel something all the time,” she said, “like a mass.”

A doctor interviewed by CTV was not able to hold out too much hope for patients in the aftermath of the failed mesh. “Unfortunately, there’s not a whole lot to do for the patients that have it in,” Dr. John Morrison, a surgeon, told CTV. “My advice for patients is to leave it alone and if they have any problems with it, then it’ll have to be dealt with at that time.”

In the meantime Copland, like Duchesne has mirrored scores or other disgruntled plaintiffs in filing, or joining hernia mesh lawsuits in order to secure compensation and justice for their pain and suffering. “I’m angry and disappointed,” she said.

More SURGICAL MESH News
“There should be more testing on these products, and not so quick [sic] to get them onto the market if they’re not ready,” Copland said.

It should be noted that in the US, Ethicon Physiomesh Flexible Composite Mesh was approved in April of 2010 by the US Food and Drug Administration (FDA) under a 510(k)Clearance, a loophole that allows updated designs based on existing products to skip the otherwise requisite clinical trials and intensive testing normally required of new products. The Ethicon Physiomesh was approved with a 510(k) Clearance (#K093932) as ‘Substantially Equivalent’ (SESE) to a previously-approved product already on the market.

There was no review by a third party…

Posted by
Paaul McCann
on July 9, 2017
Had original small bowel blockage and hernia repair using mesh in Oct.2016 I had 4 additional surgeries in the following months. Lots of complications and ambulance rides. Wanting to know if there is a claim to be filed. If so what is the probability of success and cost.