Two hernia mesh lawsuits have been filed related to failed Ethicon Physiomesh that has since been recalled voluntarily by the manufacturer in several countries. The product was approved in 2010 by the US Food and Drug Administration (FDA) through the fast-track 510(k) Clearance program as it was deemed to be substantially similar to other products on the market at the time. 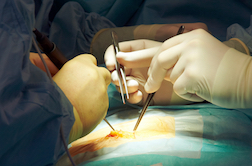 Plaintiffs wonder if the product would have been approved had it been subjected to the normal, lengthy clinical trial process that Ethicon, a unit of pharmaceutical giant Johnson & Johnson (J&J), was spared through the approval of a 510(k) Clearance.

Plaintiff Sarah Gilman filed a surgical mesh lawsuit against J&J after receiving the allegedly defective Physiomesh Composite mesh last year for the repair of a ventral abdominal hernia (Gilman v. Johnson & Johnson et al., Case No. 8:16-cv-03502, filed December 27, 2016). It wasn’t long before Gilman began experiencing health complications that included, but not limited to the adhesion of the mesh to vital organs.

Gilman had to undergo a second procedure to have the problematic mesh removed. Gilman filed her hernia mesh lawsuit in US District Court for the Middle District of Florida.

A similar story involves plaintiff Connie Franklin, a resident of Georgia who received the Ethicon Physio abdominal mesh for a hernia repair (Franklin et al v. Johnson & Johnson et al., Case No. 4:2017-cv-00031, filed February 2, 2017). After experiencing health complications that included nausea and severe pain, Franklin went under the knife a second time in 2016 to have the Physiomesh removed. During the procedure, surgeons discovered a tear in the Physiomesh product, through which Franklin’s intestines had protruded.

The failure was characterized as catastrophic. Franklin filed her surgical mesh complications lawsuit in US District Court for the Middle District of Georgia.

Ethicon Physiomesh is designed for the repair of hernia. It is normally inserted laparoscopically through a small incision and deployed at the intended site. Laparoscopic surgery is becoming a new standard for certain procedures as it minimizes blood loss, and the smaller incision speeds healing while reducing strain on hospitals and frees up beds more quickly. Surgeons perform the procedure aided by a camera.

While laparoscopic surgery is not targeted in the two lawsuits, the product is. Ethicon Physiomesh is made of polypropylene, reported to be the same material used for the oft-maligned transvaginal mesh that’s been the target of numerous lawsuits in recent years.

More SURGICAL MESH News
A rate of complications deemed higher than expected coincided with a large study that suggested possible safety risks for patients. Upon analyzing unpublished data from two, sizable independent hernia registries located in Denmark and Germany, Ethicon made the decision to voluntarily recall the product in several countries, including Australia and Europe as well as the US.

An Urgent Field Safety Notice was issued by the manufacturer last May.

The approval of Ethicon Physiomesh through an FDA 501(k) clearance provides additional fodder for plaintiffs bringing a hernia patch lawsuit.

Posted by
John Knoebel
on April 21, 2017
Mesh in 1997
Major issues with colon leakage now
Posted by
vickie
on March 17, 2017
I have a vaginal mesh in place to cover up a huge tumor removal it continually bleeds every time I insert food into the stomach, I can no longer have a bowel movement I have to take a gallon jug of golytely everyday. I have seen many doctors finally the doctors say there is nothing they can do the tumor was so big they had to take some anal colon now all the scar tissue wont let me go to the bathroom. for the rest of my life I will never be able to go to the bathroom normally. I still feel like the mesh has caused so much tearing and ripping inside I constantly have stomack problems