Maureen Billings describes herself as "a young 74—I'm very active. I still work, although I'm retired. I do in-store demos—food, mops, wrinkle stuff. And I really enjoy it. I get to know a lot of people and a lot of products that I never thought existed. It's fun." Her enjoyment of life was interrupted—almost permanently—recently when the defective Medtronic Sprint Fidelis leads on her implantable cardiac defribrillator (ICD) failed. 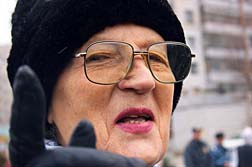 Billings learned of the recall via a notice from Medtronic in December 2007—two months after the recall was announced. She says, "I contacted my heart doctor's office, and they told me to come in. When I got there a gentleman, I believe from Medtronic, checked my defibrillator and set an alarm on it and showed me what it would sound like if it went off.

"While he was doing the testing, my heart doctor came in and asked, 'How is she?' He said, 'Oh, I think she'll be okay.' But I wasn't. A month and a half later, almost two years to the day since it was first put in, it fractured."

That was on January 21, 2008. Billings was at home watching television when the ICD's alarm went off. "I had the TV on, and I thought it was coming from the TV, so I dismissed it," she says. The next day, at exactly the same time, the alarm went off again, then again the day after. "It scared me to no end. It throws you for a minute," Billings says. "I guess that's why I dismissed it the first two times. The third time I heard it, I pulled up my pyjama top and boy, it was coming in loud and strong."

Billings called her doctor's office and was told to come in at once. After checking the ICD with a monitor, the doctor's assistants immediately turned it off. Billings says, "That left me without a backup, no backup whatsoever. If anything had happened, I would have been out of luck.

"They told me, 'We can't let you go home with the defibrillator not working.' They had to call in the heart doctor because I was so upset. I was crying. I was so upset that it's surprising I didn't have a heart attack right there. I thought, 'Only two years? It was supposed to be good for nine years.'

They called my daughters, and two of them came in right away. They both missed work, and one of them had to come in through a heavy snowstorm—it was just ridiculous. I think I had everyone up in arms because I was so upset. I could understand, say, a battery that needed to be replaced, but to know this was no good, and they still put it in me?

"The gal that checked my defibrillator said that the leads had fractured and had to be replaced. She told me later that she tried to remain as calm as possible because I was so upset; she said that she couldn't tell me everything at the time because of that.

"Later, she told me that my defibrillator nearly went off on January 19 [two days before the alarm triggered] at 6:46 in the morning when I was sleeping. But it didn't go off; isn't that amazing? I guess it wanted to. They say it's like getting kicked in the chest by a mule—it knocks you right on your keister. She said she didn't know why it never went off, but it didn't; God knows why not. Someone must have been watching over me. It might have killed me."

Billings was taken to the hospital the same day to have the Sprint Fidelis leads replaced. There was one patient ahead of her, she says, so "First they were going to do it the next day, then the surgeon said, 'Let's do it this afternoon,' because she was so concerned.

"They replaced the bottom lead. They couldn't get the old one out because tissue had grown around it, so they capped it off and replaced with a heavier lead. So now I've got another lifelong scar. If they have to do it again, I'll have a complete Z on my chest," Billings laughs.

The surgery was no picnic, Billings says. "When they put me under, I get deathly ill. I just throw up and throw up and throw up and I don't quit. They kept me overnight after the surgery. The pain itself was not unbearable; it was like an aching. They wanted to give me pain pills, but they make me sick too, so I just took Tylenol. They gave me Tylenol with codeine when I first came in, and I just threw up and threw up. I had some pain in the top of the shoulder as well. It wasn't too bad, but it wasn't fun or anything, either.

"I imagine there are worse cases than mine. I met up with another woman whose lead fractured, but she was so dependent upon this device that when she was going through surgery she had to be on life support."

Medicare may cover the costs of Billings' surgery: "Let's hope. I just got a statement from the hospital and I'm surprised that Medicare isn't going after Medtronic for this. They put out $51,000 two years ago to put in the defibrillator, and now here I am going through it again. I haven't gotten a statement from the doctor yet, but I imagine it won't be cheap."

More News
Billings missed her life routine while recovering. "I couldn't work, I couldn't drive for two weeks, I couldn't raise my hand above my head, I couldn't lift anything heavier than ten pounds." She has now joined a class action suit against Medtronic. "I got some literature from the attorney," she says, "and I read that in 2005 they knew that these leads were bad, but they still put them into people, including me.

"That's what made me decide to join the suit—the fact that they knew the Sprint Fidelis was no good in 2005."

Medtronic may try to escape Sprint Fidelis suits due to the recent Supreme Court decision in Riegel v. Medtronic, which barred state court suits against medical manufacturers for products that received pre-market approval (PMA) from the FDA. However, the Sprint Fidelis never went through the entire PMA process; it received fast-track approval through a different process. Billings asks, "Is this process called 'Guinea Pig'? I don't see how they're going to get out of this thing. There have been deaths from it."