Medtronic, Inc. has voluntarily suspended sales of its Sprint Fidelis defibrillation leads--a component of Medtronic's implantable cardioverter defibrillators (ICDs) that link the heart to the ICD. Personal injury lawsuits are now being filed against Medtronic alleging the company is responsible for manufacturing and marketing defective defibrillators.

Send your Sprint Fidelis claim to a lawyer who will review your claim at NO COST or obligation.
GET LEGAL HELP NOW

Sales stopped after the Sprint Fidelis leads were linked to five patient deaths. The electronic leads can fracture, causing the defibrillator to misread heart rhythms. This can cause the defibrillator to either deliver unnecessary shocks or not deliver shocks when necessary. In addition to the deaths, serious complications have also occurred as a result of lead fracture. 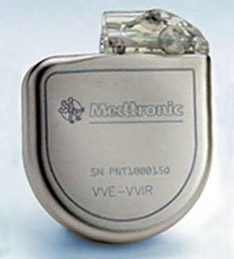 Medtronic estimates that more than two percent of patients fitted with Sprint Fidelis leads will suffer a lead fracture within 30 months of lead implantation. Medtronic will cover the cost of the faulty lead and contribute up to $800 to pay for medical costs not covered by insurance. However, so far the company will not pay for the cost of replacing a lead that has not malfunctioned, meaning that patients who are concerned about a potentially faulty lead will have to pay for the surgery on their own.

There are reportedly around 268,000 leads implanted in patients in the US and around the world. So far, the company and the FDA have only recommended that patients see their doctors to have their ICDs reprogrammed. The reprogramming would better monitor for the potential of lead fracturing. They have not recommended having the leads replaced because such surgery is considered risky, more so even than defibrillator replacement surgery.

If you or a loved one has suffered damages in this case, please click the link below to send your complaint to a lawyer to evaluate your claim at no cost or obligation.
Please click here for a free evaluation of your Sprint Fidelis claim
Last updated on Jun-2-16

Two years after Medtronic stopped selling the vilified Sprint Fidelis lead, there is a growing concern as to its continued viability—and while Medtronic and the medical community in general recommend not replacing working leads unless they fail, some doctors are doing just that.READ MORE
Failure Rate of Medtronic Sprint Fidelis Lead Could Be Higher

Patients with the Medtronic Fidelis Sprint lead, a medical device that connects to the heart and was expected to be effective in 95 percent of patients in spite of a recall two years ago, may be worse off than first thought. A new study suggests that three years after implantation the Sprint Fidelis lead is only expected to remain functional in 88 percent of patients.READ MORE
Medtronic Sprint Fidelis Leads Sparked "Extreme Anxiety"

Patients who have been affected by the 2007 Medtronic Sprint Fidelis lead recall are contacting lawyers to determine whether or not they have a claim against Medtronic. While some people have actually been harmed by fractured Sprint Fidelis leads, others say they constantly live with the fear that their defibrillator will not work as promised, a potentially fatal problem.READ MORE

Posted by
Texas
on March 14, 2012
my legs ,upper back, buttocks numbness,my legs shake uncontrollable,depression etc.
Posted by
Texas
on August 15, 2008
I received a continuous audible alarm from my ICD this AM which may indicate that I am experiencing problems with the defective leads. I have the ICD that used the defective leads.
Posted by
Texas
on July 13, 2008
I received first lead Oct 1996. In July 2007 I received 14 shocks from a cracked wire. That wire was parked and a new wire and defibrillator was implanted. Months later I was informed that the new wire was also recalled. I still have the recalled one in place.
Posted by
Oklahoma
on March 9, 2008
My brother passed away due to his Medtronic Sprint Fidelis failing to operate properly. His Medtronic Sprint Fidelis was recalled due to defective lead wires. His death could be a direct result of this recalled lead wire. He had numerous problems with the implant not working properly for several months preceeding his death in Jan 08. His was implanted Jan 07.
Posted by
Anonymous
on January 16, 2008
Hello I am a Medtronic victim. At the age of 23 I had a massive heart attack during a semi-pro football game during my summer vacation from college. After all the diagnosis they figured that my system shut down due to the hot humid weather and the lack of being hydrated properly.

I was then told that I would need a defibrillator installed and that I could never play any contact sports ever again. In which put me in a bind becaise I was making about $450 per game. What a financial blow that was. I want to say about 3 months later my device shot off while I was working out about 4 times which scared the living hell out of me. I went to the hospital and the Medtronic rep said that whoever set up my device, set my device to low for a person of my age group he fixed the issue. Then I want to say about another 2 months or so it went off again about 4 times while I was working out again. I went to see the Medtronic rep and he couldn't figure out why my device went off again he reset it and that was it.

As time went on I then recieved a letter late 2004 from Medtronic to contact my Dr about certain defects regarding my device. I spoke with my Dr early 2005 and he said that I need to schedule a replacement surgery pronto. This procedure he said is life threatening.

What these mega companies and these defense lawyers are not getting is that being told that your device is being recalled is something that is very depressing and uneasy to handle because this product is suppose to save my life. I look at my situation and thought I canâ€™t let this get me down. And I moved on.

I want to say about a couple months after my replacement surgery which took a couple of months to heal and is a life threatening procedure. I saw a news report stating that Medtronic knew about the defective devices and still put them out there for profit. And then was paying doctors kickbacks to help promote these defective products.

Receiving this info put me in a state of depression. I looked at the situation like if I canâ€™t trust my own doctor who can I trust. Medtronic made billions off the people by selling the people defective devices.

Medtronic argued that the federal Safe Medical Devices Act of 1990 preempted state law claims related to its products. â€œMedtronic thought that within one year, this litigation would be history because of preemption. Not the case. Rosenbaum ruled that the plaintiffs had raised triable issues of fact as to whether Medtronic had actual knowledge of the defect and hid that evidence from the FDA.

In his ruling, Rosenbaum wrote, â€œIt defies logic, and flies in the face of Congressâ€™s decision to impose a regime strictly regulating medical device manufacturers, to think Congress intended the result Medtronic advocates.â€

Know with all this info on the table, it is an insult to the American public for these mega defense lawyers and mega corporations to think that they can do whatever they want to the people to gain profits. And it is another insult to know that the Bush administration is backing these corupt businesses up. Iâ€™m wondering if Medtronic cut the Bush administration a check to join forces with them.

This issue is one of the biggest decisions the Supreme Court will ever have to face. Even with Judge Rosenbaum defending the people. Medtronic has equiped themselves with probably the best defense team put together. But with the edvidence against them its going to be a challenge for Medtronic to overcome these sticky charges. I am not looking for a big payday here I just want justice to be issued and Medtronic to be made the example of corupt business practises. To me Medtronic is worse than the well known Enron company.

To me this reminds me of the biblical story of David and Goliath. May God be with all the victims.

Posted by
California
on December 20, 2007
The system quit working 4 times. I had to have 5 different surgeries to fix broken leads and battery. Finally I had the system taken out last Oct. 2006.

I have consent pain in my neck where they cut me open 6 six times. Physical therapy did not work for the pain. Where the battery was I also have a lot of pain.

Posted by
California
on December 2, 2007
This is the 3rd medtronic lead that I have had that has fractured. I just had the sprint fidelis lead put in on 5/16/07 to replace the lead that had fractured a 2nd time. The first fractured lead was removed & replaced in 2002. This lead has not fractured yet but the Doctors have agreed it is best to remove it now before it fractures because of my history. I am scared & upset that I have to go through another lead replacement which is a very serious surgery. I am worried for a 3rd time that I may not survive the surgery. When I asked my Doctor why I have had (3) bad leads he said it is like being struck by lightening 3 times. I am upset that I have to stop my life again & go through (2) months of recovery. My ICD is implanted behind my left breast so my recovery time is longer then most. I am only 46 years young that is why I asked that is be put there instead of my collar bone. I need legal help ASAP since they are trying to schedule the surgery in the next (2) wks.
Posted by
California
on November 26, 2007
Cardiac, medical, and ongoing complications as a result of negligence and misinformation and lack of appropriate care by attending physicians. Including misrepresentation and failure to treat in appropriate and timely manner.
Posted by
Ohio
on November 20, 2007
3 days of electrical shocks on the left side of the heart (7/13-7/17) Had to have the ICD removed and the lead resituated, costly, painful and very stressful. Doctor said something happened to the lead and it had to be capped off. Very stressful not knowing if the ICD will work if necessary. Originally implanted 3/9-07.
Posted by
Rhode Island
on November 8, 2007
I'm a nervous wreck. It's always on my mind that I have something in me that may fail at anytime and that's no way to live. I feel like I'm walking on eggs all the time. I have enough things on my mind now I have this to think about.