Attorney Donald Singleton was recently contacted by a woman who believes she was the victim of pharmaceutical malpractice. The potent prescription painkillers she got from her pharmacist for her chronic pain condition turned out to be a heavy dose of anti-inflammatory steroid. "After a few days, the pain she could usually control with her prescription was still there, she was feeling sick and realized the pills in the bottle were the wrong ones," says Singleton, who is currently investigating the "mis-prescription" as a potential case of pharmaceutical malpractice. 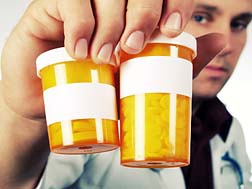 "She and husband began to suspect there may be something different about the pills and realized after checking the Internet that the pills looked different than they should," adds Singleton.

Singleton has recently brought onboard a retired pharmacist to consult with him on these kinds of cases in his practice. "I believe there is a need for more lawyers to represent people who have suffered and been injured by pharmaceutical malpractice and this is the kind of expertise you need to work on these kinds of actions."
Interestingly, all cases of pharmaceutical malpractice may not be exactly accidents. In the case that Singleton is currently looking into, initial questions about how such an event happened is leading to the possibility that tampering may have been involved. "It is possible in this case," says Singleton, "that someone may have stolen or switched the pills."

That is a growing problem as well, according to Singleton, particularly when it comes to drugs known for their value on the street such Demerol or OxyContin—the latter sometimes called Hillbilly Heroin.

"Before the pill is actually dispensed, there should be a double check, if not a third check by the pharmacist before the drug leaves the pharmacy and goes into the hands of the patient to make sure that the drug being dispensed is in fact the drug in the bottle," says Singleton.

More Malpractice News
There is a certain standard of care, just as in the practice of medicine that the pharmacist has to provide, as Singleton sees these kinds of cases. "And if that standard of care is not met there is a potential cause of action for pharmaceutical malpractice," adds Singleton.

"I think pharmacists who have had these problems have to ask what steps should they take to prevent this from happening again?" says Singleton.

Donald Singleton did his B.A. at the University of Georgia (1987) and his J.D. at the Walter F. George School of Law, Mercer University (1990). He is a member of the Atlanta Bar Association, the Association of Trial Lawyers of America, the Georgia Trial Lawyers Association, the National Employment Lawyers Association. He is a Martindale-Hubbell highest rating for legal ability and ethical standards and is ranked as Very High to Preeminent within the legal community.