In December 2005, Sam Pringle was admitted to hospital to repair a hernia from a previous surgery. He was just one of many patients who have gone through a terrible ordeal after Bard Composix Kugel Mesh Hernia Patch was used; to this day he is still suffering from infections. Had Davol, the manufacturer, acted on its early reports that the recoil ring opening the hernia patch could break, his ordeal could have been avoided. 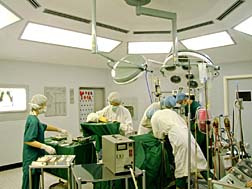 "My surgery went well but I started to get nasty stomach aches a few days later; my doctor told me this was a normal healing process, but I didn't feel better," says Pringle (not his real name). "As weeks progressed, my stomach became swollen and I had a fever so my doctor treated me with antibiotics. By April 2005 I had horrific pains and no bowel movements. This time I was given medications to try and flush my system.

That didn't work either. By the time my temperature hit 104 I was rushed to ER. They couldn't do anything except stabilize me and two days later I had surgery - I woke up with a hole in my stomach the size of my fist. This really did me in. I had a wound vac machine by the side of my bed - a vacuum to remove the infection. It was awful to see this stuff coming out of me. I was in the hospital for 11 days with this machine running and then they sent me home with the machine.

I had to use the wound vac for six weeks--what an ordeal. Luckily I am strong; somebody else might not have made it. After all this time, the wound was finally closing and I began to feel better.

I went back to my doctor for a checkup and was told that everything was fine but it could possibly happen again. He told me that he cut out part of the Kugel Mesh because it was infected with a strep bacteria - they had to send out two samples to a pathologist to be sure- it was very unusual.

I have never felt right since this surgery: my stomach is so big it looks like I swallowed a basketball. I had another infection one month ago and constantly have diarrhea and constipation. I have been on a course of antibiotics every day. But after talking with my surgeon again, he told me that I still have Kugel Mesh in my body! Why didn't he remove all of it? I had a CAT scan and indeed it is still there; this explains why I am still sick.

This March I had another 'attack' that put me in bed for a few days. I couldn't do anything except watch TV; this ad came on and an attorney from Chicago was talking about the Kugel Mesh recall. What recall? This was news to me. Then I went online and saw more information on your website.

More News
Once I had my records, I went to the hospital's risk management department. I wanted to know if they were still using the mesh, did they know about the recall, were they contacting Davol, the manufacturer. Their reply: 'We have to do some research'. Then I phoned Davol. They told me they had sent letters by FedEx to the hospital administrator and the surgeons about the recall. I am still waiting to find out who was aware of the recall—why didn't they contact me?

I try to do everything to keep my health together and now this has happened. I tried to go back to work but became so ill that I sold my business and I am now on government disability. You have to be really sick to get government disability and they didn't even bat an eye. Davol should have been more aggressive about the recall—they should have called every patient. People really need to know about this product. I, for one, have really been let down.

This product should never have been on the market. Davol did the right thing by sending out a warning but it wasn't soon enough - I had the Kugel Mesh repair in December and the recall happened later that same month. But Davol knew the Kugel Mesh patch was defective way before the recall.

Posted by
debra brown
on July 29, 2011
my son had hernia surgery done 3-4 yrs ago
since his surgery he has had numourus stomach issues
pain, swelling, nausea, bloody stools, ect. Today he had to have emergancy surgery as his origional hernia repair was twisted again. however when the surgeon went in to do the surgery there was no sign of the previously used mesh.
My question is doe's this mesh desolve after long periods of time? Is it normal for the mesh to just disappear?
His new surgeon wants him to try to get records of his previous surgery to verify what was used, but in the mean time i was just courious as to whether or not anyone else has had this issue?