A panel of three judges with the Missouri Appeals Court has found Johnson & Johnson “Outrageous because of Evil Motive or Reckless Indifference” and upheld an award of over $2 billion in damages: $500 million in compensatory damages, plus another $1.62 billion in punitive damages. This group of 22 ovarian cancer victims-- all of whom developed ovarian cancer from J&J’s baby powder-- has now received the sixth largest award in U.S. legal history. 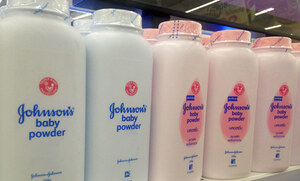 A state court jury in July 2018 awarded the 22 women an astonishing $4.7 billion in damages after determining evidence at the six-week trial found that J&J knew its talcum products caused cancer since the 1970s, when internal documents were unsealed revealing J&J executives were aware of asbestos liabilities. But Johnson & Johnson chose to publicly deny asbestos in its talc and instead chose to put profit over people’s lives. (In 1971 researchers found talc in ovarian and cervical tumors of women and a study was published by the International Journal of Obstetrics and Gynaecology titled “Talc and Carcinoma of the Ovary and Cervix.”)

“A reasonable inference from all of this evidence is that, motivated by profits, Defendants disregarded the safety of consumers despite their knowledge that talc in their products caused ovarian cancer,” according to the ruling by the Missouri ppeals court, as reported by AboutLawsuits. Each woman or married couple was originally awarded $25 million in compensatory damages and because the company is so evil and reckless, the jury added $4.14 billion total in punitive damages — $3.15 billion against J&J and $990 million against its subsidiary J&J Consumer Inc.

The Missouri Court of Appeals judges determined that expert testimony from the 2018 trial regarding asbestos exposure was “based on reasonable methodology and was a legitimate basis for holding J&J liable for the cancer that women developed after using its talc-based powders”. The panel upheld the $500 million in actual damages originally awarded to the women but punitive damages were reduced to around $1.6 billion.

The judges upheld some of the punitive award, finding “significant reprehensibility” in J&J’s handling of the issue of asbestos in its talc. The bad conduct included J&J avoiding “adopting more accurate measures for detecting asbestos,” discussing the asbestos risk of the powder in internal memos and refusing until recently to replace talc in its baby powder with cornstarch, which doesn’t pose a cancer risk, according to Bloomberg.

J&J still maintains that its baby talcum powder is safe. As well, a spokesperson for the company complained that plaintiffs’ attorney Mark Lanier “tricked” the jury: during opening statements Lanier told the jury that the 22 women had one thing in common: they used J&J talc products and got ovarian cancer. J&J argued that didn’t mean anything "more than 22 people catching the flu after watching the Super Bowl means that the Super Bowl caused their flu." and “the sheer number of cancer diagnoses caused the jury to overlook a lack of scientific evidence.” J&J said that the jury's identical $25 million compensatory damage awards to each of the plaintiff families is proof that jurors were confused or overwhelmed.

More TALCUM POWDER News
Law360 said that the plaintiffs countered in their brief that the jury "had discretion to award the same damages because each respondent suffered from the same disease." The case is: Ingham v. J&J, ED-107476, Missouri Court of Appeals for the Eastern District (St. Louis).

In 2017 the company started to get slammed with lawsuits over its talcum baby powder and asbestos exposure. Two years later the U.S. Justice Department began a criminal investigation to determine whether J&J purposefully misled the public about asbestos fibers in its talcum powder. The pharmaceutical giant is still facing over 20,000 lawsuits claiming its talc-based baby powder causes either ovarian cancer or mesothelioma, the latter linked specifically to asbestos exposure.

The New Brunswick, New Jersey-based company finally pulled its baby powder off U.S. and Canada shelves in May 2020. In 2018, Johnson & Johnson reported more than $81.6 billion in worldwide sales, making it one of the largest health care companies in the world.