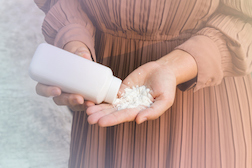 Plaintiffs in the lawsuit Paniagua et al v. Johnson & Johnson et al, Case No. 1716-cv02907, Circuit Court of Jackson County, MO filed January 31 claim that Johnson & Johnson's Baby Powder and Shower-to-Shower products, which have been on shelves for decades and marketed toward women as safe and hygienic were actually harmful.

"These products are far more dangerous than helpful. And Johnson & Johnson knew it," wrote plaintiff attorney Richard Paul in the lawsuit petition.

The main ingredient in Johnson & Johnson's Baby Powder and Shower-to-Shower products is talcum powder, a widely known human carcinogen when ingested. The American Cancer Society isn't clear about whether asbestos-free talcum powder causes cancer but according to the International Agency for Research on Cancer, perineal (genital) use of talc-based powder is "possibly carcenogenic to humans."

Johnson & Johnson was hit in 2016 with combined jury verdicts of $197 million for three talcum powder cancer lawsuits in St. Louis, MO. That same year, Bloomberg reported that Johnson & Johnson faced around 1,700 talcum powder cancer lawsuits that alleged that the company ignored studies linking its Baby Powder and Shower-to-Shower products to ovarian cancer and failed to warn consumers of the risk.

Eleven of the plaintiffs in the Kansas City lawsuit are suing on behalf of themselves and their relatives who died from ovarian or endometrial cancer after using Johnson & Johnson's talcum products. The other three plaintiffs are suing on behalf of themselves, two claiming that they developed ovarian cancer and the other alleging she developed an ovarian tumor after using the talcum products.

More TALCUM POWDER News
Johnson & Johnson promoted its talcum products as symbols of freshness, cleanliness and purity and promised women in its marketing that a "sprinkle a day keeps the odor away."

Johnson & Johnson knew of the increased risk of ovarian cancer from use of its products due to five decades of studies on the talc/cancer association, the lawsuit claims. In 1994, the Cancer Prevention Coalition even informed Johnson & Johnson's CEO via letter that studies dating back to the 1960s showed that frequent use of talcum powder in the genital area poses a "serious health risk of ovarian cancer.

According to the lawsuit: "The letter, which cited a study conducted by Dr. Bernard Harlow from Harvard Medical School, requested that Johnson & Johnson withdraw its products from the market or, at a minimum, put a warning on them about ovarian cancer. The company, however, refused again."