The very first talcum powder cancer lawsuit was filed by Diane Berg back in 2009. Johnson & Johnson offered her a settlement but Berg refused and wound up with nothing. This heroic whistleblower paved the way for ovarian cancer lawsuits today. 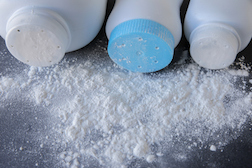 Berg developed ovarian cancer when she was 49 years old—she used J&J’s talcum powder for most of her life. She had a full hysterectomy and underwent six months of painful chemotherapy. In 2013, four years after she filed the suit, the pharma giant offered Berg $1.3 million to settle, but the deal included a confidentiality clause. Berg refused, and thus became a whistleblower against J&J. Last year Berg told the New York Post that her lawsuit “was never about the money”. Rather, she wanted the world to know that for 40 years, J&J knew about the link between ovarian cancer and their talcum powder but chose to hide it from consumers. Although a federal jury found that Johnson and Johnson’s talcum powder was linked to ovarian cancer, she wasn’t awarded any money. Berg told the Post that South Dakota is a very conservative state, and there had to be a unanimous verdict on whether any compensation should be paid. Still, she was surprised at the decision.

If Berg’s trial took place in Missouri, the outcome may have been a lot different. Juries in that state awarded hefty damages to three plaintiffs in 2016. Over 10 years since Berg’s surgery, one Missouri jury awarded $72 million in damages to the family of who died from ovarian cancer.

More TALCUM POWDER News
How could J&J have not known the link? Scientific evidence regarding the risk of talc and its link to cancer goes back more than 40 years. An Obstetrics & Gynecology report first published back in 1971 found that regular use of talc on a woman's genitals enhanced risk of ovarian cancer by 30 percent. The report was published again in 1992 but didn’t point the finger at J&J specifically. Then in 2003 the medical journal Anticancer Research published an analysis of 16 previous studies involving 11,933 women. The researchers confirmed a 33 percent increased risk of ovarian cancer when talc was used.

“In my opinion, talcum powder products should be withdrawn from the market and, until then, be clearly labeled indicating the risk,” Berg told the newspaper. “Now I hope the family of Mrs. Fox will be the first of many to be awarded damages. Some people think $72 million is excessive, but I don’t think so. How can you put a value on a life?”