Todd, Teresa and Paula have something in common. They remember their mothers and grandmother using talcum powder up until they were diagnosed with ovarian cancer and passed away. 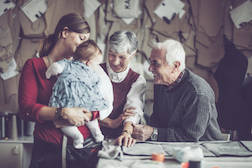 “My mother used talcum powder during the 1970s up until her death in 1994 of ovarian cancer,” Paula said in an email. “We had no knowledge that prolonged use of the ‘baby powder’ could lead to cancer and ultimately her death.” Paula and her family filed a complaint against Johnson & Johnson. They know that the statute of limitations may apply, in which case they wouldn’t have a claim, but on the other hand, the statute may be applied from the time they became aware of the dangers.

“I know of many different types of cases that can wave the statute of limitations based on the fact that the evidence didn’t surface about talcum powder cancer until much later,” says Paula. “I believe my mother’s case could be viewed in such a way.”

In the lawsuit (Hogans et al v. Johnson & Johnson, case number 1422-CC09012-01), the family of deceased Jackie Fox claimed that Johnson & Johnson was aware of the potential link between talc and ovarian cancer but continued to market the product and did not properly warn consumers that they were at increased risk of ovarian cancer.

Todd was only nine years old when his mother passed away from ovarian cancer in 1991. “She used the Johnson & Johnson Talcum powder religiously,” he remembers. “She was a healthy woman before this sudden diagnosis—it came out of nowhere.”

Theresa’s grandmother also used J&J talcum powder. “She used this talc all the time and passed away from cervical cancer at the young age of 35, leaving behind my mom and three other younger siblings,” she says in an email. “These children were left to be raised by my great grandparents and an aunt. It is so unfair that my mom did not get to experience the mother /teenage daughter relationship that they should have been able to have. My mom listens to others talk about their mom being there for their graduation, their wedding, and being there for the first grandchild. It is just unfair.”

More TALCUM POWDER News
Johnson & Johnson’s baby powder has been on the market from about 1894. Attorneys with Onder, Shelton, O’Leary & Peterson in St. Louis, cited in three trials (one of which resulted in a $72 million award for the family of Jackie Fox, above) research that began connecting talcum powder to ovarian cancer in the 1970s. Further, studies indicated that women who regularly use talc on their genital area have up to a 40 percent higher risk of developing ovarian cancer.

About 2,000 women nationwide have filed talcum powder cancer lawsuits, according to the Chicago law bulletin (Nov 3, 2016). With increased awareness of the association between talcum powder and cancer, lawyers are reviewing many additional cases, such as those filed by Paula, Todd and Theresa.

Posted by
no
on August 23, 2019
no Corrine, don't be an idiot. you need to check with a doctor and perhaps a lawyer. no one here knows her history or physiology.
Posted by
corrine holshue
on August 7, 2019
can talc powder cause breast cancer .? My mom used it everywhere.