At least one baby and a 6-year-old breathed baby powder, which caused them to eventually develop mesothelioma, according to their J&J talcum powder asbestos lawsuits, and J&J wins in South Carolina

Donna Olson used J&J talc since she was a young girl, breathing in talc particles from the cloud she made. Teresa Leavitt’s mother used J&J’s baby powder on her as a baby in the 1960s and she continued to use it herself as a teen, powdering her face and hair daily for years. Both women testified in court last week and both women won their asbestos-talc lawsuits against Johnson & Johnson. 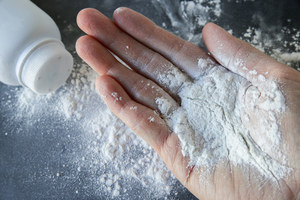 
An Oakland jury and Alameda Superior Court Judge Brad Seligman in March listened to Leavitt’s "exceedingly detailed and very ugly testimony" about the medical procedures she has undergone to treat her mesothelioma and the side effects of her cancer treatments, which have caused her intense pain and kidney issues. Judge Seligman also heard about how she saved her husband's life when they met and how she will have to say goodbye to her two teenage daughters, according to Law360. The judge further said that Leavitt knows she is going to die a brutal death.

In response to the verdict, J&J’s lawyer argued that “J&J didn't have a duty to warn, in part because the FDA didn't require a warning label, and that the court erred by asking the jury to decide whether the companies were liable for a design defect claim, because J&J didn't design baby powder to contain asbestos.

Along with J&J, Leavitt also brought claims against onetime talc supplier Cyprus Mines Corp. that manufactured and sold baby powder that was allegedly contaminated with asbestos. Leavitt’s attorney showed that J&J instructed talc mining companies not to report asbestos levels under a certain threshold, therefore a reasonable jury could have concluded that J&J bore total responsibility for the conduct. She added that they were "lucky" that the jury found Cyprus 2 percent at fault. (Imerys, the primary talc supplier to J&J, filed for bankruptcy earlier this year.)

The case is Leavitt v. Johnson & Johnson, case number RG17882401, in the Superior Court of the State of California, County of Alameda.


A New York jury on May 21 ordered J&J to pay at least $25 million in compensatory damages to Donna Olson, age 66, and her husband. According to court documents, Olson has mesothelioma in her lungs. The trial was held the New York City Asbestos Litigation (NYCAL) court – the first of four to be tried in that court in 2019.

Because Olson argued that J&J put “corporate profits and reputation over the health and safety of consumers,” the jurors return at the end of May to consider assessing punitive damages.
The New York case is Olson v. Brenntag, 190328/2017, New York Supreme Court (Manhattan).


Also on May 21 a South Carolina jury concluded that Johnson & Johnson was not liable for a woman’s mesothelioma that she blamed on asbestos in the company’s baby powder, Bloomberg reported. J&J had the case removed to federal court last month, but a judge sent it back to state court for trial. The South Carolina case is Beth-Anee F. Johnson v. Johnson & Johnson, 18-CP40-01781, South Carolina’s Court of Common Pleas, Fifth Judicial Circuit (Columbia).

J&J won a New Jersey trial March 27, and another win in California on April 5.

You Win Some, You Lose Some


Donna Olson’s verdict was the 10th win for talc plaintiffs since 2016, when trials claiming Johnson & Johnson’s talc-based powders caused cancer began, according to Bloomberg (May 21). Johnson & Johnson has won seven defense verdicts, jurors deadlocked in three cases and J&J settled four cases. Some of the plaintiffs’ verdicts have been overturned; others are still on appeal.

More TALCUM POWDER News
Last year ,J&J was hit hard in a Missouri state court verdict, when a jury returned a landmark $4.7 billion verdict in favor of 22 women who say they contracted ovarian cancer from talc exposure. (But it may not have to pay the award, according to Bloomberg).

But J&J still needs deep pockets. It is still facing about 14,000 pending lawsuits and insurance experts says that unless Johnson & Johnson is able to negotiate significant settlements or otherwise resolve the litigation, it may face a large number of trials and potentially expensive verdicts when the federal cases are remanded back to district courts for individual trials.

Posted by
Josie Parent
on June 9, 2019
On Feb. 9, 1958 I married. In 1959 a girl was born. In 1960 a boy was born I was the happiest lady in Louisiana.after my babies were Christened Catholics. I was using JOHNSON and JOHNSON BABY POWDER on my 2 babies rubbing it on their hiennies with my hands and playing and tickling them. It was so much fun watching them laughing and giggling with me. My hips started hurting sooo bad 2 yrs ago and I don't know why...I hurt...Im thinking about going to the Chiropractor. I just turned 80 yrs old June 3rd. Im constantly dizzy.
I am blind because my retina doesn't work. It just stopped working.
But I am not going to give up as long as my daughter and my son are still alive. I could not bear to lose them before I die. I just put up with the pain and use my Medicare and Humana Supplemental Ins.I am Josie Parent in Hammond, La. 70403. My phone # is 1985 542 xxxx
These are my details.

Posted by
Annette Williams
on June 2, 2019
Ok how come they won the case and I was told because my overian cancer was tooked out in 2000i wasn't eligible for a law suit because it was too late but these to ladies start back in1960. My overian cancer was as big as a canolpe. This is not fair and I see j&j and shower to shower ever since I was 7years old