Recipe for Fracking Soup Is a Mystery

Anyone watching the Oscars on February 27 may have missed the significance of Gasland, an Oscar-nominated documentary about the process of fracking and the impact the process allegedly has on grown water supplies. Most attention is focused on the winners, not the nominees. However, individuals whose water taps can instantly be turned into a blowtorch by holding a lit match under running tap water are thankful for any public awareness to their plight, however minor. 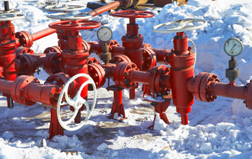 Fracking is a controversial process to which gas companies are increasingly turning, in order to free up previously inaccessible supplies of natural gas. A soup of sand, water and various chemicals are injected under high pressure deep into sandstone formations, in an effort to break up the sandstone. Fracturing the sandstone in this way creates fissures through which the gas can escape, and allows for capture.

However, it has been alleged that the gas and other chemicals are seeping into groundwater supplies. The Oscar-nominated documentary Gasland focused on toxic and flammable tap water encountered by residents in Weld and Garfield Counties in Colorado.

Gas companies have denied any wrongdoing, but in some cases have been trucking in potable water for affected residents in some areas.

There's an even more damning problem. Gas companies that participate in fracking have so far been reluctant to identify just what the chemicals they use are. They view such information as proprietary, and thus refuse to release it.

For this reason, residents whose tap water has been impacted by fracking have no idea what's actually in the water.

It was in 2009 that lawmakers first attempted to pass the Fracturing Responsibility and Awareness of Chemicals Act, in an effort to shed light on the actual chemicals used in the soup that is forced into the ground during fracking operations. The bill did not succeed two years ago, but there is a renewed call for its passage.

Original sponsors of the bill, Colorado lawmakers Diana DeGette and Jared Polis, have since asked the Environmental Protection Agency (EPA) to investigate the purveyors of fracking to determine if violations of the Safe Drinking Water Act have been committed by the use of more than 32 million gallons of diesel fuel during fracking operations.

The Colorado Independent reported on February 28 that diesel fuel, or various fluids containing diesel fuel, were used in fracking operations in 19 states between 2005 and 2009, according to an investigation conducted by the House Energy and Commerce Committee. In testimony to the Committee, the companies in question admitted to using diesel fuel.

While fracking is exempt from the Safe Drinking Water Act, the exemption did not cover fracking operations that used diesel fuel.

More Hydraulic Fracking News
Beyond the concern over toxins and chemicals entering the ground under high pressure and potentially contaminating groundwater is the impact of fracking wastewater on treatment plants. An investigation undertaken by The New York Times discovered that billions of gallons of wastewater used in fracking operations were being sent to sewage treatment plants not properly equipped for the removal of toxic materials indigenous with fracking operations.

As a result, sewage treatment plants in at least three states were found to be releasing inadequately treated water containing these unknown chemicals into streams, rivers and lakes.

It was also determined that nearly 200 fracking wells were found to be producing wastewater containing hundreds or even a thousand times the acceptable amount of radioactive material based an accepted water safety standards.

If you or a loved one have suffered losses in this case, please click the link below and your complaint will be sent to an environmental lawyer who may evaluate your hydraulic fracking claim at no cost or obligation.
Request Legal Help Now

Posted by
PJ
on March 16, 2011
Too much money being passed to our reps by these greedy jerks. I myself wonder how they can do this to Mother Earth and expect it to last for our grandchildren? Do they not have families or friends that are being affected somewhere along the line ? Please, contact your representatives and tell them we are tired, as well as angry at their greediness being fed at our expense !!!
Posted by
Taelur
on March 14, 2011
For humanities sake....why do not the powers that be i.e. the President or the people whom we put into positions by electing them to office......why do they not work for the people...we are our brothers keepers after all!!

In doing so we take care of the future populations in our country.
Big Brother so to speak has an olbigation to mind the store of protection of the basics, clean air, water, food supplies.

If we are to be the leaders in our world that our Forefathers sacraficed and layed down their lives for..we are to step up to the plate and do what is right for humanity.
We cannot tell the world to clean up their act with these problems if we continue this practice ....not to be integrity ourselves...the heads of states need to do the right thing....clean it all up and those resposible take to task for all the injustices caused by their deeds of misconduct. How do any of you sleep at night???

Posted by
Shirley
on March 10, 2011
within 5 miles there are at least 2 wells being fracked at any given time. they dont seem the least bit concerned . but it sure bothers me. when we shower your eyes itch and burn. and am going to get this water tested. live on disability so really cant afford to buy water to take a bath. it seems the goal is more frackin ,the hell with the people who live there. not thier workers,but the BIG companies.
the workers are just trying to support thier families ,but they mare ALOT of money.