People who have had loved ones die recently after being given tainted Heparin are taking action against the makers of the drug. However, there are some people who believe that Heparin was contaminated long before that contamination was discovered, and they think the drug has been killing people for quite a while. Now, they are hoping that they, too, can file their own lawsuits against the company that they hold responsible for their loved one's death. 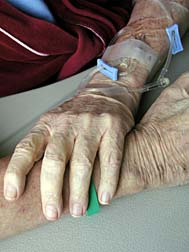 "Kathie M. says her father was killed by an allergic reaction to Heparin. Although he died in 2006, before the Heparin contamination was discovered, Kathie strongly believes that he was a victim of the contaminated drug.

The whole thing started when Donald, Kathie's father, was in a minor car accident. "He was only going about five to ten miles per hour," Kathie says. "But he passed out for some reason, so the paramedics took him to the hospital. He had been on Coumadin, so they put him on Heparin to thin his blood. He was on Heparin the whole time he was in the hospital, from January 12 to January 22, and received Heparin through an IV.

"My father was in a coma for eight days after the car accident. When he woke up they [the hospital] moved him to the discharge unit and he seemed to be recovering. Then he suddenly went downhill. He couldn't talk any more and he kept grabbing his stomach like he was in pain. In 15 minutes he had a complete Heparin bleed and blew up to 300 pounds [he was 190 pounds regularly] and his body could not pump blood from his heart to his brain. He was bleeding internally.

More HEPARIN News
"They moved him back to the trauma unit and every organ in his body returned to normal except his brain. He was officially brain dead and was moved to a hospice. On February 25, 2006, he passed away at the hospice.

"I think that he knew something was wrong internally but he couldn't tell us. That was why he was grabbing his stomach. He knew about the internal bleeding but couldn't talk. Before this happened, he was a strong, hard working guy. I strongly believe he died because of the Heparin. I think he was given tainted Heparin, had an allergic reaction to it and died.

"I think a lot of people have been given contaminated Heparin and died and their families do not know about it."

Baxter Healthcare, supplier of approximately half the Heparin used in the US, faces a number of lawsuits regarding Heparin. However, as more people realize their loved ones may have been the victims of contaminated Heparin, the list of lawsuits will likely grow.