The heparin recall in January over an unknown bacterial contamination may be linked to small, unregulated production houses in China. Last month, Baxter International recalled nine lots of the injectable blood thinner after hundreds of adverse reaction reports, and four deaths.

In all of 2007, there were about 100 reports or adverse reaction to heparin. The spike in 2008, given that the year is just beginning, is an alarming increase. The US Food and Drug Administration (FDA) is investigating the reports, and according to the Associated Press the FDA put in a request to doctors to switch from using Baxter heparin during the week of February 11th.

However, it was not revealed what heparin products doctors would be switching TO, and while Baxter accounts for about half of the US heparin supply, according to AP, there are other players in the field. 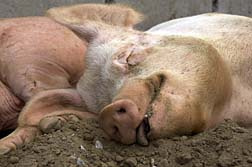 The concern, regardless of the brand on the label once the product reaches the doctor's office, is the source of much of the raw heparin.

And according to a revealing investigation published in the New York Times this morning, conditions are anything but sterile.

Heparin is made from pig intestines, and while major companies such as Baxter maintain that they can vouch for the quality of their suppliers, various issues affecting the swine industry in China of late has cast a shadow over the supply chain.

Specifically, pig disease has swept the country over the past year, depleting stocks. This has left heparin producers scrambling to source new providers of raw materials, and some of those providers are murky at best.

In fact, entire villages in China have been given over to the processing of raw materials—pig intestines—for the heparin industry. Visiting one of the heparin houses in Xinwangzhuang village, a reporter for the New York Times found that nearly every house contained a crude heparin operation.

The reporter describes teams of four to eight women diligently processing pig intestines into crude heparin. Some of the intensities are spliced into sausage casings. The remainder of the mucous membrane is cooked, resulting in a dry substance known as crude heparin. This stuff is in turn sold to larger producers, which refines the crude heparin and re-sells it to major suppliers such as Baxter, which manufacturers the final product.

While the producers of the end product are regulated, the same cannot be said for the small, mom-and-pop shops that make the crude heparin. Zhu Jinlan is the owner of one such shop in the village. She showed a New York Times reporter around, including the back room of the small house where she lives with her husband and child. Been doing this for 10 years, the reporter was told.

The conditions are, to say the least, crude.

Such village-based slaughterhouses and producers of crude heparin sell to both the local and export markets—and they have been busier of late given the pig virus that swept the country last year, driving up prices. In 2007 an epidemic of blue ear pig diseases swept through 25 of China's 31 provinces, and prices soared. Many producers have been turning to the small heparin sweatshops due to cost.

Cui Huifei, a heparin expert at the Shandong University School of Medicine, told the New York Times that the epidemic "made those biotech companies inevitably purchase from the family-style plants, for cheaper prices."

While the larger slaughterhouses are regulated, smaller operations like Zhu's are not. "We have no certificate," Ms. Zhu told the New York Times.

Changzhou SPL is an American-owned factory in China that provides much of the active ingredient for heparin to Baxter. While investigators are examining its records, principles of the factory and Scientific Protein Laboratories, which owns a majority share of the facility claims that its supply chain is safe. A spokesperson for the company maintains that SPL buys from 10 or 12 reputable suppliers and remains confident that no unsavory product is entering its supply.

However, an investigation by the New York Times suggests a different story. One of the wholesalers to SPL, Ruihua Biochemical in Hangzhou, told the New York Times that it provided crude heparin (which it manufactured), as well as product provided to them from the small, village-based factories. When asked about inspections, Ruihua indicated that it did not have authority to inspect the facilities of private operations, or their animals. A proprietor of one of the workshops confirmed to the New York Times that it had sold raw heparin to Ruihua, without an inspection.

While SPL maintains it only buys from two primary wholesalers—Ruihua, and Changzhou Techpool—a spokesperson for a major supplier in China, Nantong Koulong maintains that his company has sold directly to SPL. The spokesperson confirmed to the Times that some of the heparin stock was purchased from unregulated workshops.

Zhu Jinlan in Xinwangzhuang confirmed that she sells to Koulong, and also indicated that she sold directly to SPL two years ago.

More News
The SPL factory itself, meanwhile, falls into a regulatory void in that, according to a spokesperson for China's State Food and Drug Administration, the plant had never been inspected because "as far as we know, it is not a drug manufacturer; it is a producer of chemical ingredients," Shen Chen told the New York Times.

Meantime, while American officials certified the SPL plant to export to the United States, it was never inspected by either government, according to the newspaper. SPL has been exporting heparin to Baxter since 2004.

Some experts have indicated that as much as 70 percent of China's crude heparin, for both the local market and for export, come from the crude, and unregulated shops.

The FDA admitted earlier this month that it had not conducted an inspection of the SPL facility, even though it approved the plant to become a major supplier to Baxter. Such an oversight is a violation of the FDA's own policy and protocol.