A sexual harassment and retaliation settlement was in the spotlight, this past July. It involved more than 25 construction workers who were subjected to physical assaults and other types of harassment, and some workers were retaliated against after complaining to supervisors. “It’s so important that these women supported and corroborated each other,” says attorney Vincent White.  “It is never okay for someone to harass you at work.” 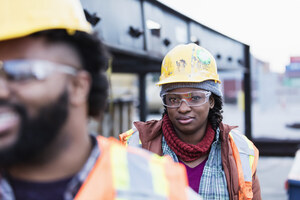 Vincent White’s law firm, White, Hilferty and Albanese, is the largest dedicated plaintiff-side employment firm in New York, and the largest firm in the U.S. that handles harassment cases. “I used to naively think that about 30 percent of women had been ‘treated differently’ in the workplace but now I realize it’s more like 90 – 100 percent. Still, from our perspective only about four percent of victims actually report harassment, so cases like this recent TradeOff settlement are not surprising,” says White.


TradeOff is a Long Island-based company that provides nonunion, general labor at major construction sites across the city. On its website, TradeOff says it recruits and trains “minority and immigrant ‘skilled’ workers and ‘individuals with little employment history’ (aka formerly incarcerated) as laborers and carpenters in the construction industry.

The company purportedly works with community-based organizations and faith-based organizations to give individuals the opportunity at a second chance for a mistake or transgression they committed in their lives. And it provides the New York City construction industry with a ‘competitive workforce option’ at a ‘substantial cost benefit’.

But Tradeoff is also known as a ‘body shop’ because it provides mainly black and Latino—male and female-- and parolees (who must work as a condition of their parole) as construction laborers to large companies.

Many of those workers are women, mostly of color, who suffered “retaliation, harassment, discrimination and intimidation, and supervisors’ demands for sex in exchange for increased pay and overtime,” said state Attorney General Letitia James at a news conference in July and reported by the New York Daily News.

According to the Daily News, the women were subject to quid pro quo harassment by managers demanding sex for pay and overtime opportunities; sexual, physical, and verbal assault by male employees, and sexually explicit photos and videos sent by managers and other workers.

In the TradeOff case, the Laborers’ Local 79 union supported the women. “Many black women have endured similar experiences working for Trade Off and other racist body shops here in New York,” said Tierrra Williams, a former Trade Off employee and now a staff organizer for Local 79. “We deserve to be treated as human beings, not as black bodies to be abused and exploited on construction sites.”

“In this case, as in too many others, there is an attempt to victimize women, particularly in a male-dominated industry where women are regarded almost as prey,” says attorney Vincent White. “And with race discrimination is an assumption that people are less able to fight back, or they are expected to just take this treatment, which I find very disturbing.

And this case comes when ‘Black Lives Matter’ and the #MeToo Movement are making a difference, but White says this behavior has been going on since the 1970s. “The big difference is that movements now empower people to stand up, seek out and fight back,” he says.

Eighteen women will receive settlements ranging from $10,000 to $110,000. “Trade Off considers any level of harassment to be unacceptable, and deeply regrets that our processes for training and oversight failed some of the women who worked for us,” the company said in a statement.

Another Union’s “Campaign of Intimidation”


Unlike the TradeOff Case, the union wasn’t behind one of White’s clients, an electrician union member. “On the job site women could complain about harassment to her, similar to filing a complaint with Human Resources,” White explains. “She would take the complaint up the line to the general contractor. Because she did her job, and she did it well, the retaliation she suffered was horrific. People tried to silence her and her brother was physically assaulted at a union rally.”

Despite her union wielding a campaign of intimidation against her family and fighting hard during 18 months of litigation, White’s client wouldn’t back down and ultimately she was vindicated. A settlement was reached and today she is doing well.

The Risk of Retaliation


But she is the exception more than the rule. As White said, only about four percent of victims actually report harassment. It’s a huge risk: the prospect of losing your job and retaliation can deter 96 percent of victims, but attorneys can help – even before litigation proceeds. “For instance, we have cooperated with police to place restraining orders. We control the narrative in the press and try to give protection through the media,” says White.

More Harassment News
And there are retaliation laws, both federally and in some states: From the moment you report harassment, those laws are set up to protect you. If your employer retaliates in any way (e.g., you are fired) your employer can be seen as guilty until proven innocent.

Vincent White is a partner at White, Hilferty and Albanese, a firm which he has grown to represent more victims of workplace discrimination and sexual harassment in the United States than any other firm. Vincent holds a deep-seated belief in the meritocracy, the simple concept that the best person for a job should have that job, completely free from discrimination. Vincent received his Juris Doctorate from the Hofstra University School of Law. He attended the University of Nagasaki Gaidai and Le Moyne College for his undergraduate studies.