Inside a GranuFlo Class-Action Lawsuit

A GranuFlo class-action lawsuit against DaVita HealthCare Partners Inc. is one of several lawsuits seeking class-action status on behalf of patients who have been allegedly harmed by GranuFlo and NaturaLyte side effects. 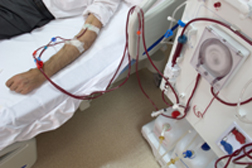 Defendants in lawsuits alleging GranuFlo side effects vary. DaVita HealthCare Partners is one. Fresenius Medical Care is another. Both defendants operate a network of dialysis clinics nationwide. However, with Fresenius, there is the added wrinkle of serving as the manufacturer of the dialysis duo, GranuFlo and NaturaLyte. The two serve as agents integral to the dialysis process, involving production and regulation of bicarbonate levels. If levels are too high, there is a risk of GranuFlo cardiac arrest and similar outcomes involving NaturaLyte.

One GranuFlo sudden death lawsuit capably summarizes the issues at play. The introduction of GranuFlo to the market in 2003 brought a change to previous protocols involving formulations based on acetic acid. GranuFlo, according to the lawsuit, was based not on acetic acid, but rather diacetate. To that end, GranuFlo added 8 mEq/L of acetate rather than the standard 4 mEq/L, effectively doubling the levels of acetate in dialysate.

This can pose a risk to the patient, as the lawsuit Melvin Nunes, individually and as Personal Representative of the Estate of Stella Nunes v. DaVita Healthcare Partners Inc., outlines.

“If a physician orders a bicarbonate level of 37 mEq/L for the patient, the clinic may set the dialysis machine to deliver 37 mEq/L from the bicarbonate concentrate alone. If the clinic is using GranuFlo, the patient may receive a total buffer load of 45 mEq/L instead of the 37 mEq/L of bicarbonate normally prescribed by the physician.

“Some DaVita clinics may have delivered, or may still be delivering, total buffer levels as high as 48 mEq/L, exposing patients to increased risk,” the lawsuit goes on. “The result is the delivery of higher bicarbonate levels than warranted, which can cause danger to patients.”

The lawsuit, Case 1:13-cv-00574, alleges that the late Stella Nunes attended the DaVita dialysis clinic at Vacaville, California, in late December 2010. It is alleged that either GranuFlo and/or NaturaLyte was used as part of Nunes’ treatment. According to the lawsuit, Nunes began to experience shortness of breath while undergoing treatment, ultimately losing consciousness. Evacuated to the hospital, Nunes was diagnosed as having suffered a heart attack - alleged to have been related to GranuFlo cardiac arrest.

More GRANUFLO News
Nunes died the next day, December 27, 2010. The lawsuit, dated March 6 of this year, was filed in US District Court for the District of Colorado. The NaturaLyte class-action lawsuit does not name Fresenius Medical Care.

But other GranuFlo class-action lawsuits might. Fresenius first became aware of the increased bicarbonate issue related to its products in the fall of 2011, and alerted dialysis clinics on November 4 of that year. However, only clinics in Fresenius’ own dialysis network were alerted. It wasn’t until the internal memo was leaked to the US Food and Drug Administration (FDA) that an investigation ensued, and on March 29 of last year, the FDA issued a Class 1 recall of GranuFlo and NaturaLyte.

The recall was too late for Stella Nunes.

If you or a loved one have suffered losses in this case, please click the link below and your complaint will be sent to a drugs & medical lawyer who may evaluate your Granuflo claim at no cost or obligation.
Request Legal Help Now

Posted by
Stacy Lewis
on September 16, 2015
My son was 21 when he went into cardiac arrest, remained vegetative for 13 months and then died of internal bleeding.

Damn the Greed of this Company and the trial of tears it has left behind!

Posted by
CWK
on February 10, 2014
In January 2006 my son began Dialysis at Davita facility in Atlanta GA. My Son went into Cardiac Arrest each time he was dialysized (3) times per week on Monday, Wednesday, Friday for 11 months, each time having to Coded, and finally having a massive Stroke and Cardiac Arrest which left him paralyzed from head to toes. He was in ICU for (8) months in vegetated state on respirator and life support. He had to be Coded every time he went on dialysis. After Coding him 10-15 times over the course of (8) months the Coding was discontinued, and all Life Support was taking away to allow him to die on June 9, 2007, He was 36 years old. O'Lord! how I miss my dear son.
Posted by
Adriana Vela
on December 20, 2013
I went into cardiac arrest while being dialyzed. I already have existing heart conditions. At a Davita facility.