Top Attorney talks with LAS about the GM ignition system problems that have allegedly led to numerous accidents and, in the case of Brooke Melton, even death. 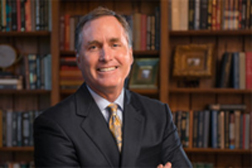 Marietta, GA: According to its database, the National Highway Traffic Safety Administration (NHTSA) says there was no reason to believe the rate of problems with GM vehicles was significantly different from other vehicles.

Lance Cooper (pictured at left), however, the attorney who represents a Georgia family whose 29-year-old daughter died in a Chevy Cobalt crash on a highway outside Atlanta in 2010, thinks the NHTSA got that very wrong.

“There clearly was a problem and there were a number of accidents,” says Cooper. “These cases obviously slipped through the cracks and that speaks to the need to review and evaluate NHTSA’s investigation process.”

If not for the efforts of the Melton family and Cooper’s diligence, the ignition system problems that GM has known about for 10 years and caused untold crashes might still be a company secret.

Back in 2010, still reeling from the death of their daughter, the Melton family took two questions to Lance Cooper. Their daughter Brooke’s Chevy Cobalt had struck another vehicle when she lost control and they wondered if their daughter’s estate might be liable. Secondly, she had taken the car into the dealership the day before because the engine kept turning off. They wondered if there was a problem with the car.

“Brooke was seat-belted, driving at or about the speed limit and sober, according to the investigating officer,” says Cooper. “We wondered what could have happened to make her lose control. It was a straight two-lane road. It certainly raised our suspicions.”

Cooper went straight for the car’s Black Box. Downloading the information from the onboard computer system has become routine practice in auto liability cases. “The Black Box is not the Bible,” says Cooper, “But it gives you a good understanding of what the vehicle was doing.”

“In Brooke’s case, we know she was traveling somewhere between 55 and 58 mph shortly before the crash,” Cooper recounts. “We know from the Black Box that the key was in the accessory position when the impact occurred. It means in all likelihood she is driving down the road and three or four seconds before the crash her key shuts off. That shuts off her engine, her power steering and her brakes, and she loses control of the car.”

The Melton family sued GM and won an undisclosed wrongful death settlement - in part, because of the GM documents and testimony that came forward at the trial. Since then, the automaker is now the focus of even more intense scrutiny with more lawsuits expected to follow.

“Somebody at GM,” says Cooper, “we never figured out who, came up with the crazy idea that if you are driving down the road at 60 mph and your engine shuts off that is not a safety problem. You just pull over and start your car back up and get on your way. That is in large part why this didn’t get fixed in 2005.

“The GM testimony and documents also indicate that they rejected the fixes as not an acceptable business case. It was about business for GM and the company didn’t focus on the people that would be in the cars and that would be in these situations where the engines would turn off,” says Cooper.

“And now in 2014, we have all these crashes and fatalities (as many as 12), and in February 2014, GM finally realizes it is a safety problem. It is too late for Brooke, of course,” says Cooper.

In litigation history this is the kind of case that comes along once in a lifetime for a lawyer. A family walks into an attorney’s office with a tragic loss that ends up tripping a giant recall, threatens to swamp an auto industry giant in personal injury liability cases and forces a congressional investigation.

Cooper underplays his role somewhat and emphasizes the fortitude of the Melton family.

More FAULTY IGNITION News
“Really the credit should go to the Meltons because they had the courage to take on GM,” says Cooper.

“It’s been very difficult for them to go through with this case. They gave me the opportunity to continue to investigate. And as I told them what we were uncovering, they said we need to get to the bottom of this. And in fact, we did, although we are still learning new things from the recent GM disclosures.”


Lance Cooper is the founding partner at Cooper Law Firm in Marietta, Georgia. He specializes in product liability cases involving automobile design, and has won millions in verdicts for clients in cases against GM, Ford, Honda, Toyota, Kia, Continental General Tire, Hilton Hotels and the Department of Transportation.

If you or a loved one have suffered losses in this case, please click the link below and your complaint will be sent to a personal injury lawyer who may evaluate your Faulty Ignition claim at no cost or obligation.
Request Legal Help Now