The numbers involved in the GM recall tell a lot of the story. Millions of cars subjected to the GM ignition recall, 36 deaths, many more injured. These are all allegedly the result of an ignition switch that can inadvertently switch out of the “on” position to the “off” or “accessory” position. But the consequences extend beyond those numbers, to one woman who was found guilty of causing a crash that killed her fiancé, and has spent years blaming herself for the accident. 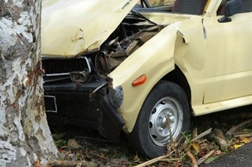 According to USA Today (11/24/14), Candice Anderson has now had her guilty plea in a car accident that killed her fiancé overturned. Anderson had been charged with intoxicated vehicular manslaughter because she had generic Xanax in her system at the time of the crash. She later pleaded guilty to negligent homicide and was given five years’ probation, 260 hours of community service and fines.

Worse than that, though, may have been the guilt of thinking she caused the accident that killed her fiancé. Though Anderson and her fiancé were not wearing seatbelts when the crash occurred, the airbags did not deploy when the car crashed into a tree. The car Anderson was driving, a 2004 Saturn Ion, was one of the cars included in the ignition switch recall.

The consequences of an ignition switch inadvertently switching out of the “on” position include a loss of power to most of a vehicle’s electrical components, potentially causing an accident. The loss of power can result in airbags not deploying properly, further putting the occupants of a vehicle at risk of serious injury.

GM reportedly did not contest the overturning of Anderson’s conviction. It is not known if there are many other cases where a person was charged for a car accident that may have been caused by the faulty ignition switch.

More FAULTY IGNITION News
So far, 36 deaths have been approved by a compensation fund, set up to compensate victims of crashes linked to the ignition switch problems. According to the latest GM report (12/12/14) concerning the claims, there have so far been a total of 2,215 claims made to the fund. Of those, 229 were related to people who died, 142 were Category One claims - involving quadriplegia, paraplegia, double amputation, permanent brain damage or pervasive burns - and 1,844 were Category Two claims - requiring hospitalization within 48 hours of the accident.

If you or a loved one have suffered losses in this case, please click the link below and your complaint will be sent to a defective products lawyer who may evaluate your Faulty Ignition claim at no cost or obligation.
Request Legal Help Now