Chicago attorney Ken McClain says he doesn't mind at all if you refer to him as the Popcorn Lung Lawyer. "I don't mind if people say that," says McClain whose has been litigating against makers and suppliers of a butter flavoring product called diacetyl since 2002. "It's been very rewarding. We've done a lot of good and managed to get the diacetyl out of microwave popcorn." 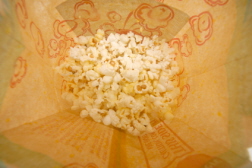 
"People should not breathe fumes from the bag, but that's exactly what the buttery flavor and smell is designed to make you do. In fact, the Orville Redenbacher advertisements show kids doing exactly that!"
The verdict is thought to be the largest ever awarded to an individual with lung disease associated with the diacetyl.

"My client, Gerardo Solis, was a life-long nonsmoker," says McClain. "All he has wanted to do is work and take of his family. " Solis is only 45 years old and has been living with lung disease for ten years. Although is lung capacity is reduced to just 25 percent, Solis managed to attend the two-week trial.

"It is a terrible thing," says McClain. "And happens to people through no fault of
their own."

McClain's firm, Humphrey, Farrington & McClain, based in Lexington, Missouri, has tried and / or settled hundreds of cases involving people who developed bronchiolitis obliterans as a result of exposure to popcorn flavoring. "I believe we do about 99 percent of the cases in the US," says McClain.

More PERSONAL INJURY News
Like Gerardo Solis, most of his clients are people who were exposed to the chemical in factory situations. However, McClain says he is seeing consumers come forward.

"Consumers are getting sick too," says McClain. "We have five consumer cases currently—generally popping more microwave popcorn than a person might want to.

"People should not breathe fumes from the bag, but that's exactly what the buttery flavor and smell is designed to make you do. In fact, the Orville Redenbacher advertisements show kids doing exactly that!"

Ken McClain is a name partner with the firm of Humphrey, Farrington & McClain. He is a graduate of the University of Michigan Law School. His practice is focused on personal injury, asbestos claims and toxic torts.

If you have suffered losses in this case, please send your complaint to a lawyer who will review your possible [PERSONAL INJURY Lawsuit] at no cost or obligation.
Request Legal Help Now