It's enough to turn a carnivore into a vegetarian. If you have eaten a hamburger at McDonalds, Burger King or another fast food giant, as well as a number of grocery chains, you have probably eaten ammonia-treated beef from Beef Products Inc. (BPI). Food processors, some restaurant chains and even regulators defend ammonia-treated beef as the most effective way to prevent foodborne illness. However, salmonella and E. coli have been found with alarming frequency in BPI meat—which has also been subject to scrutiny for fraudulent advertising. 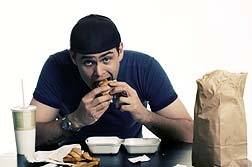 More than eight years ago, BPI came up with the idea of injecting ammonia into beef—specifically, into meat trimmings once used for pet food and cooking oil.


When a product is labeled "100 percent beef," it should not contain . . . the same chemical found in floor cleaners.
The USDA gave BPI the go-ahead to use ammonia and exempted it from regular testing. However, the New York Times reported on December 31, 2009 that E. coli and salmonella were found dozens of times in testing for the federal school lunch program on ammonia-treated beef from BPI. The program reported that between 2005 and 2009, the company had a rate of 36 positive results for salmonella per 1,000 tests, compared with a rate of nine positive results per 1,000 tests for the other suppliers.

According to the Times, USDA tests found E. coli in 1.03 percent of beef samples, although Richard Jochum, spokesman for BPI, claimed that only 0.06 percent of the samples mentioned in the report showed traces of E. coli.

Last July school lunch officials temporarily banned their hamburger makers from using meat from a BPI facility in Kansas because of salmonella. One month later, two 27,000-pound batches of meat destined for lunch-room trays were found to be contaminated. Still the USDA did nothing.

Is Ammonia Safe to Consume?

You won't find ammonia listed as an ingredient on BPI hamburger meat labels because the company requested that ammonia be classified as a "processing agent" and not an ingredient. The USDA complied, stating, "It eliminates E. coli to the same degree as if you cooked the product."

Some scientists believe that ammoniated beef is a potential safety risk. One expert referred to the product as "pink slime" back in 2002. "I do not consider the stuff to be ground beef, and I consider allowing it in ground beef to be a form of fraudulent labeling," said Carl S. Custer, a former USDA microbiologist.

Consumers have the right to know what they are eating. When a product is labeled "100 percent beef," it should not contain anhydrous ammonia (the same chemical found in floor cleaners). It remains to be seen whether ammonia is harmful to consume. The USDA has deemed that residual ammonia levels were an "acceptable" 800 parts per million, but BPI has received complaints of pungent odors since 2003. Georgia state records show that nearly 7,000 pounds of hamburger was returned to Beef Products after cooks who were making meatloaf for state prisoners detected a "very strong odor of ammonia" in 60-pound blocks of the trimmings. Officials had no idea the meat was treated with ammonia—it wasn't on the label. Beef Products responded by diluting their meat with other untreated meat.

More FOODBORNE ILLNESS News
The BPI website states that "as with EVERY substance, the amount [of ammonia] determines whether the substance has a beneficial or potentially harmful effect…an oral dose of Ammonia sufficient to be toxic would not be consumed, as the substance would be extremely distasteful long before a toxic level was achieved."

Tell that to the Georgia state prisoners. It's time for the USDA to insist on correct labeling—consumers have the right to know there is ammonia in their food, especially when it doesn't even protect them against foodborne illness.

In this video clip, from the feature documentary Food, Inc., Eldon R. Roth, the founder and owner of Beef Products, Inc. describes himself as a "mechanic" and explains that his product (which can no longer be called meat) is "a marriage of science and technology."

If you have suffered losses in this case, please send your complaint to a lawyer who will review your possible [FOODBORNE ILLNESS Lawsuit] at no cost or obligation.
Request Legal Help Now