Ann suffers from depression and anxiety, to the point where she can no longer work. Her insurer Unum Provident recognized her illness as legitimate—which is surprising in itself as Unum has denied so many others who have mental illness—and accepted Ann's claim. But like so many others, they abruptly cut her off. 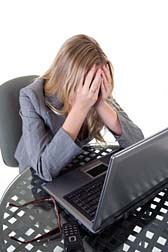 For 18 years, Ann has worked as a computer programmer for the same company but she explains that her position "pushed her over the edge" and she couldn't eat or sleep and was nervous all the time. And she has short-term memory loss. "If someone asks me to do something, I forget it 5 minutes later," says Ann. Obviously she could no longer continue working this way. She saw a psychiatrist and Unum agreed that she had to leave her job.

"I collected short term disability from Unum for six months then long term disability benefits (LTD) kicked in last July, 2007," says Ann. "In January of this year Unum told me that I had to see an 'independent' medical examiner—one of their doctors. How can one of their doctors be referred to as 'independent'? This doctor had me sit in a room with a computer, by myself, and answer hundreds of questions on the computer. 'Most of these questions don't apply to you but answer them anyway,' he said.

Some of the questions were ridiculous, such as 'Do you like sports'. Totally irrelevant, but I answered them anyway. He concluded that because I could sit in a room and answer these questions, I could do my job—but there is no comparison to this exercise and my job as a computer programmer. So my benefits were cancelled. I can't think of anything more bogus. This doctor concluded that I could concentrate. He said I was not functionally impaired but said "she feels overwhelmed and impaired."

If I feel that way, I am that way! I have emotional issues!

I appealed and they just denied me on the grounds of what this doctor said and that I didn't see another psychiatrist: Another obstacle I ran into was that I missed an appointment with my psychiatrist and he billed me, saying he would no longer work with me unless I paid $250. I had been seeing him for a year and he refused to refill my prescription until I paid him. Now I had nobody; I believe that because I was no longer seeing this doctor, it fed into Unum's denial of my claim. I went to my family doctor to get my meds refilled—Xanax for anxiety and Cymbalta for depression. I talked to her about my problems and also told Unum I saw her, but I guess my GP doesn't count.

On top of all that I was going through all these cancer screenings which added to my stress. Naturally I am upset and now worried that I have cancer.

Unum Provident has closed my file so even if I did find a psychiatrist, I think it is too late-- unless I can start a new claim. I assumed Unum would contact my employer and let them know my disability was cancelled. I phoned HR at work and he said they had not called. Now I feel in limbo: my HR rep told me to come in next week and discuss my 'back to work process'. Because my policy has been cancelled, I am being forced into going back, even though I am not ready.

More UNUM PROVIDENT News
As well, I have a laptop at home and technical equipment from my company: they have asked me to bring it in when I return to work. Sounds weird—why bring all the equipment in? My first thought is that I will be terminated. But I am hopeful that I can go back to work in a less stressful position, maybe part-time. I can't go back to my regular workload; of course I would continue if possible but I cannot function as a programmer. I can't focus, I get confused and have short-term memory loss. So how can I go back to something as complex as a computer programmer? I have to work—I am only 48…

I did some research on the Internet about these "independent doctors" that insurance companies like Unum employ: I don't think they get paid extra for denying people but if they don't deny enough claims, Unum won't continue to use them.

Unum has forced me into doing something I am not capable of. This insurance company makes your life a living hell from beginning to end—it is not bad enough that I have these problems; Unum makes everything worse."