Hamlet has repeatedly asked First Unum for a copy of her policy: she doesn't remember ever reading that she could not receive social security—her entitlement after 40 years of work.

"I received First Unum's long term disability (LTD) insurance through my work and when I became ill and unable to work I received benefits from the insurance company," says Hamlet. "That was fine until I received social security disability insurance; Unum discontinued all of my benefits--which I should be receiving until the age of 67. I am 54 now. 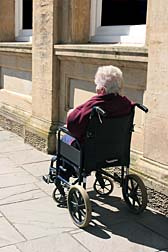 Unum sent me a letter in November. Ohmigod, I almost had a heart attack when I read it. First of all, I already have heart failure, which is why I am on LTD, along with pulmonary hypertension. Unum wants me to repay every dime of $64,000!

They told me that when I received social security, I had to reimburse them with it. Had I known that I had to pay back to Unum every dime that social security gave me, in a lump sum, benefits that I am entitled to from the date I filed until the date it was approved, I would have never paid into this insurance policy.

As you can imagine, I am really struggling. I will never be able to go back to work and I am in a terrible situation. The money I get from social security is barely enough to pay my living expenses and I have had to humble myself and apply for programs to help me, such as welfare and food stamps.

I was supposed to receive $1,379 in reduced benefits from Unum for the rest of my life. Instead I got about eight checks for this amount until I got cut off; they left me high and dry just before Christmas. I have one daughter and I can't even make her tuition payment. I even had to give up my car insurance so I can buy food for us.

More News
Back in November, I asked her to send a copy of my policy. My old employer had the policy and I also spoke with them around the same time. They contacted Unum and called me back. My employer said that, according to Unum, it is their policy to recoup any overpayment due to benefits received from social security. But they still haven't sent me a copy of this policy that I requested.

Had I known that I would owe Unum every cent I received from social security, I would never have accepted LTD from Unum. I consider Unum a loan: they owe me. And I also paid into social security for 40 years, all the years that I worked. I am entitled to both benefits.

I am waiting for legal help before I do anything. Unum also told me that if I got a job, they would garnish my wages. They put me in the worst depression. Luckily I was able to keep a roof over my head. Sorry to sound profane but I have to say it: they are spineless, money-grubbing, sons of bitches."

If you have had a disability claim denied, or if your claim was granted and then later terminated, please contact a lawyer involved in a possible [Unum Lawsuit] to review your case at no cost or obligation.
Request Legal Help Now