"First Unum has destroyed me," says Angie Summar, "and by the end of this summer, we will likely be looking at foreclosure on our home." Summar has been denied further long term disability benefits because her doctors changed her diagnosis—from bad to worse. Trouble is, First Unum has their own diagnosis; they say that Summar can go back to work. 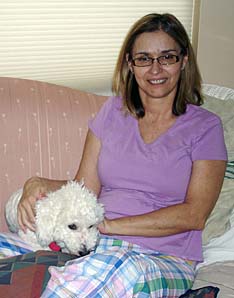 Ironically, Summar works as an insurance broker (not for First Unum) for a family-run business. In October, 2005 she was in a bad state mentally: her sister, mother and best friend all died within a year. She was diagnosed with depression and anxiety disorder and took sick leave. Summar collected short term disability from First Unum for three months and in January of 2006, long term disability (LTD) kicked in.

"My disability was granted on generalized anxiety disorder," says Summar. "On March 26, my birthday, I woke up to a seizure; my whole body trembled and I fell to the floor. It really scared me because I had never had one before.

"My doctor sent me to a neurologist. There were many concerns from the tests, but the neurologist determined that I have epilepsy. He said I had complex partial seizures and ordered an MRI of my brain and neck. This was the second MRI that I'd had because I had a few falling incidents and in the past two years I have broken my ankle twice and tore a rotator cuff from falls. We found out that I had two cervical discs that were herniated and compressing my spinal column so badly that they had to be removed right away."

Surgery was scheduled for December 13th. Throughout this time Summar was still having seizures but she was also feeling better and began to drive again, which boosted her morale. And she was back at work part-time.

"I have lived in this area for many years and been in the insurance biz a long time," says Summar. "A lot of people call me and make me their broker. Money was coming in and I let First Unum know right away—it is part of my agreement. I am on the straight up and up--I can make up to 20 percent of my income prior to disability without an offset from Unum.

When her primary diagnosis changed to a seizure disorder and possible MS, Summar notified First Unum right away. She also inquired about the two-year cap on mental disorder disability. "My disability rep said he understands my concern and said, 'Right now it isn't an issue and don't worry.'

"What he meant to say was, 'You are on mental disability which ends in January 2008 and then you are on your own.

"In November I am getting anxious. Nobody is showing me that my primary diagnosis has changed. In early December I called Unum. Kevin, my rep said my current benefit ends on January 6, 2008. 'In order to change your case, we need new attending physician statements and they will be passed on to our round table review,' he said.

'I am scheduled for surgery on my neck Dec 13 and I can't have surgery if I'm not covered,' I told Kevin.

'Well, we have to see all this before we can help you,' he said. 'Let's get all the paperwork in and we will go from there.' They wanted my tax returns and paycheck stubs, the works.

I get smacked in the face for my honesty; everything would have been fine if I just left things as is. Next day I had another seizure. This time I broke my nose and had to postpone surgery.

Finally, I got enough information to approve LTD for January and February. I finally had surgery in February. They are covering the surgery costs but I sent a letter to my attorney yesterday because they will not release and change the definition of my disability.

They recognize that I have seizures but not cognitive issues that are keeping me from working. I went to several psychiatrists and I have all their paperwork in order. First Unum is paying me only because I had neck surgery. I know they are going to cut me off any day now—it is just a matter of time."

In an email to LawyersandSettlements dated March 22, Angie Summar said the following:

More News
"Unum has not yet denied my coverage but has advised that I have no benefit left with regard to my original diagnosis: Severe Depression and Generalized Anxiety Disorder. I provided many Attending Physician Statements stating my primary diagnosis had changed toseizure disorder, fibromyalgia and cognitive function deterioration. Unum, after many requests, has not advised if it is even being considered. My disability benefit ended Jan 8, 2008 for the original diagnosis.

My short term disability was thru MetLife.Unum is covering the neck surgery as a disability event. There is a limit on recovery period benefit.
Thank you again for sharing my story,
Sincerely,
Angie Summar."

First Unum is notorious for denying policy holders what is rightfully theirs. Their excuses are heard over and over again: not agreeing with a doctor's diagnosis is one excuse for not paying long term disability benefits.

Many policy holders have lost their homes and have been forced into bankruptcy, unnecessarily. If you have been denied, or cut off from, benefits by First Unum, a qualified attorney can help-- before this happens to you.