Sharon paid into a health insurance policy with Colonial Life, a subsidiary of Unum, for almost 20 years. Despite being physically disabled from a motorbike accident, Sharon taught school for all this time—until she was diagnosed with depression. And to make her mental disability even worse, Unum Provident denied her Unum long-term disability insurance. 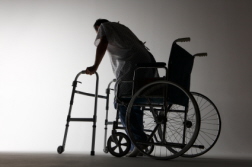 Of course Unum Provident's denial of benefits can only feed Sharon's mental condition. Her doctor took her off work in March 2010 for depression, and then she lost her job. "My neurologist recently ordered an MRI because my headaches have increased," she says.


"One lawyer told me: 'The way that Unum has you tied up on this, you have to come up with a new disease'"
"My policy states that I am entitled to $9,000 short-term disability, but I haven't received a dime. I paid into this policy for a year because I just started at this school district, and with each district, you have to get a new policy—but I paid into Unum for all these years.

"I applied for Unum disability insurance but the representative said that according to my policy, any mental problems do not qualify the first year. But all this time I was paying for Unum insurance. It isn't right.

"I was under so much stress with my principal. It got to the point that I couldn't teach without crying. Plus, I am on a walker and had terrible pain. When I was denied for depression, I went to two other doctors who both wrote that I was physically disabled.

More UNUM News
"I sent another claim to First Unum and was denied again, this time because I had a pre-existing illness. I am 56 years old—my whole body is pre-existing! Obviously I am a lot worse now than I was before: I gained 150 pounds because I couldn't exercise.

"I appealed twice but that didn't get me anywhere. I couldn't do anything. Unum didn't give me an option to get a physical examination from their independent medical examiner. Whatever I said, I didn't qualify.

"Then I sought legal help. One lawyer told me: 'The way that Unum has you tied up on this, you have to come up with a new disease.' And here's the clincher: when I had absolutely no hope of getting any benefits from Unum, I applied for social security benefits, which usually takes two years. Just four weeks later, social security said that I qualified. This is absolute proof that I am disabled."

Unum insurance will try anything to deny Unum disability, even to the point of denying that depression is an illness.