It’s a bargain made long ago with the men and women who run towards danger when the rest of us are running away from it. 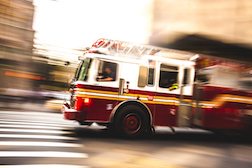 In exchange for keeping the rest of us from harm the workers compensation system in most states gives the advantage to those frontline workers, the first responders, that are injured or killed in the line of duty when it comes to claiming compensation -- even after they have left the job.

“Thank God there is someone willing to climb that ladder when your house is on fire,” says attorney Jeff Stern. “I am thankful to those people like prison guards who go to work every day in facilities with people they know can be dangerous. These are the people in our society who are willing to work in jobs that are full of risks and danger.”

Attorney Jeff Stern, from the law firm of Mallery & Stern, has focused his entire law practice on working with state employees that can be generally described as California state employees who work in first responder roles.

“These are all government employees who are there to protect the public – when the ship goes down they are the front line defense,” says Stern.

Generally speaking these are police officers, firefighters, prison guards, highway patrol officers, forestry workers, or other state employees who go to work every day with the certain knowledge that their health and life is constantly on the line.

In California, these kinds of workers are covered under Section 3212 of the California Labor Code (CLC). It provides certain “presumptions”. That presumption is the disease or health problem they develop, in certain cases, is related to the work they performed.

It means that a state worker who worked a job considered hazardous under the CLC Presumptions section has the right to claim compensation without having to wage a complicated legal battle through the court system.

The law makes clear that “a presumption is disputable and may be controverted by other evidence, but unless so controverted, the appeals board is bound to find in accordance with it.

“It is a rebuttable presumption,” explains Stern, “but the law shifts the burden from the employee to insurance provider or the employer. This is the government’s way of saying -- we understand your job is stressful and there are certain dangers and so we are going to ease the burden of proof.

“If you are an elected official and you are assassinated there is a presumption that it is work related,” says Stern.

It is, however, vastly more likely that workers with a right to claim compensation under the presumption section of the California Labor Code will have more common medical issues.

“The California Labor Code presumptions deal not only with heart attacks but also hernias, and pneumonias, tuberculosis, low back issues, and mrsa (an antibiotic resistant type of staph infection), or stress accumulated on the job that leads to a stroke or clot,” says Stern. “It deals with all these types of medical issues and more, but the unifying force in these kinds of claims is the illness they developed is connected to the job.”

For example, it is well documented that firefighters have a high risk for respiratory problems, certain types of cancers, heart attacks and strokes. What many first responders or sworn officers don’t realize is that they may be entitled to compensation even when health problems develop after they have left the job.

The California Labor Code makes clear that “the presumption shall be extended to a member following termination of service for a period of three calendar months for each full year of the requisite service, but not to exceed 60 months in any circumstance, commencing with the last date actually worked in the specified capacity”.

More First Responder Injury News
That heart attack that happens after the fireman, or the police officer retires, or that case of tuberculosis that suddenly shows up in a retired prison guard may very well entitle him or her to compensation. If that post-work job related health issue leads to death, his or her family may be entitled to compensation.

It is important to note that some other types of jobs may be entitled to the same type of claim – such as nurses who work in stressful situations or work shift work.

Stern has dealt with hundreds of these kinds of claims. As he sees it, these individuals who put their lives and future health on the line deserve much consideration.

“When shots are fired you and I are running away from this. I am running and ducking,” says Stern. “Thank god there are cops who do that. It is an honor to be able to work for these individuals.”

Posted by
Jeffrey R Rath
on April 3, 2017
Probably these protections do not apply to me?
I was a Placer County, Alpine Meadows Fire Department (Lake Tahoe region-California) administered by the Alpine Springs County Water District: First Responder As a Volunteer but paid Call and Training pay, FireFighter I suffered a Line of Duty injury in January 1990, when an ice sheet gave way from a roof my Team was making a ventilation hole for smoke and unburnt products of combustion to escape. The Fire Captain had ordered for my Team to NOT use saftey lines prior to ventilation OPS.
I fell about 20 feet and landed on my Scott bottle onto hard snow pack and was off from my regular job for about 5 months.
I was ordered by my Fire Captain to use the medical benifits from my Primary job(TWA). The Captain never documented the duty injuries.
We later found out the Water Board had some month's earlier Cancelled the FireFighter's Disability Insurance without notification to us or to the Community.
The Fire Captain was later dismissed from the Department, but for other reasons.
I have also developed significant breathing problems after I left the Department in 1992. Leaving due to D.O.D. Flight Operations duties during and after the Persian Gulf War 1990-1991 and OPS Enduring Freedom 1991-1992.
AMFD later merged with another Fire Department Operations.

Click to learn more about LawyersandSettlements.com
LawyersandSettlements.com is an online news and information site for the general public and legal community. As a legal news resource, we have emerged as an independent & trusted voice. We provide detailed and quality information on various lawsuits filed including Employment Law Cases, Personal Injury Cases, and Workers Compensation Cases.