A purported drug raid two years ago that left a Colorado man dead and his family allegedly traumatized has now become a wrongful death and first responder injury lawsuit, with the victim’s family and estate filing a case just days ago in Colorado. 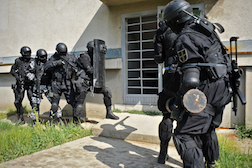 The victim of the police shooting was James Edward Strong Jr., age 32 at the time of his death on May 28, 2015. Coroner’s records show that the victim was shot with a high-caliber rifle almost 20 times, at close range, in front of his wife and children in their home. The lawsuit pits the plaintiffs against the co-defendants, members of the Northglenn Police Department and others, who maintain they had reason to believe Strong Jr. was trafficking drugs and had drugs in the home. The police also indicated they identified themselves loudly with the use of a roof-mounted sound system atop a S.W.A.T. vehicle before forcing themselves into the home.

The family maintains they did not hear the police identify themselves in what was purported to be a so-called ‘No Knock’ raid of the home. The police also report there were no drugs found in the home.

There is little doubt Strong Jr. was troubled as a young man – but there appears to be some disconnect as to the severity of those troubles. Investigators are reported to have found evidence that Strong was a convicted felon who had a “violent gang affiliation and access to multiple firearms,” according to a report issued by the district attorney. Police said Strong also had a criminal history for possession of a controlled substance, aggravated assault, forgery and identity theft.

ABC Denver 7 Television (05/26/17) reports verifying convictions for assault and identity theft. However, since moving to Colorado in 2008 the TV station could find no record of subsequent troubles with the law. Strong Jr. maintained a steady job with a moving company and for all appearances had settled down as a family man. He and his partner had two children.

According to the incident report compiled by the district attorney’s office, a confidential informant had approached police with information that Strong had allegedly been selling cocaine from his home. A sting was arranged whereby a quantity of cocaine was allegedly purchased from Strong Jr. by an informant allegedly monitored by narcotics agents.

However, the police injury lawsuit attorney representing the Strong family and the estate noted that the informant who allegedly purchased the narcotics from Strong was not searched prior to the transaction, which is described as standard police practice in order to assure any illicit drugs found on the purchasing informant must have been sourced with the vendor – in this case, Strong Jr.

Denver 7 reports that officers involved in the raid had monitored the movements of occupants in the Strong household to ensure no children would be present at the time of the raid. Children were seen leaving for school with their mother consistently at 8:30am – thus the raid was planned for 10am, when the remainder of the family was not expected to be home.

However, the day the raid was conducted – May 28, 2015 – was the day after the school year ended. Both mother and children were at home when the No Knock Search Warrant was executed, with force, at 10am. There were also other visiting family members in the home at the time.

Denver 7 reports that Strong Jr., upon hearing noises at the front of the house (the plaintiffs claim they did not hear the intruders identify themselves as police), grabbed the handgun legally registered to his wife and fired three shots. Two of the shots struck an officer in the leg and forearm. A third was stopped by a bulletproof vest the officer was wearing.

Officers retaliated by firing 26 rounds with a high-caliber rifle at Strong Jr., who was dispatched by a gunshot to the head at close range. In total, there were 19 entry wounds to his neck, face, chest, arms and lower extremities. “The remains of Strong’s body were described as pulpified in the coroner’s report,” according to the first responder lawsuit.

Officers said they feared for their lives.

Thornton Police Chief Randy Nelson issued the following statement May 26 in response to the lawsuit:

More FIRST RESPONDER News
“The North Metro Drug Task Force and the cities of Thornton and Northglenn stand by the facts, evidence, and merits of the investigation in the James Strong case. In May 2015, the Northglenn/Thornton SWAT Team carried out a valid and necessary court issued no-knock search warrant. Upon authorized entry into the home SWAT Officers clearly announced their presence, purpose for entry, and instructions to the occupants. SWAT Officers were immediately met with lethal force by James Strong in a back bedroom. A Northglenn SWAT officer was struck and wounded by three rounds fired from James Strong’s weapon. James Strong’s firing of a weapon at officers caused officers to return fire, mortally wounding him. Narcotics evidence and stolen property were obtained from the residence as a result of the search warrant.

“In August 2015, the Adams County (17th Judicial District) Critical Incident Team completed an independent investigation and presented its findings to the Adams County District Attorney whose legal analysis of the officers’ actions during the James Strong case resulted in the conclusion the officer’s use of lethal force was justified.”

If you or a loved one have suffered losses in this case, please click the link below and your complaint will be sent to a personal injury lawyer who may evaluate your First Responder claim at no cost or obligation.
Request Legal Help Now