After 45 years practicing law, Phil Brown could go golfing and forget about coming to the office every day. Instead, he says he can’t wait to get to work every morning. His focus for almost a decade now has been financial elder abuse. 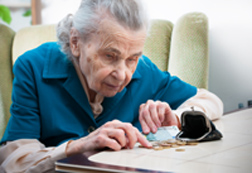 He often sees situations so egregious, so despicable, that he’s on a mission to see the perpetrators held in check. “You want to eat these people up,” says Brown, in a remarkably calm and measured tone. “You’re outraged each time you get a new case.

“I am really not a hard-assed lawyer. I would rather talk to the opposing lawyer and talk things out and avoid stress for my clients,” says Brown. “Just getting near a courtroom is very stressful for all parties, and if you can avoid it, that is good thing. However, there are times when it is going to happen.”

Sadly, as Brown explains, it is often family members who advise a parent to turn over a bank account for safekeeping, then bleed it dry or perhaps take advantage of a frail and failing mind to obtain title to a property. “It’s quite like stealing,” says Brown.

Frequently, it’s a third party who calls out the perpetrator and saves the senior from financial ruin, or from a set of circumstances the victim never would have approved of or wanted.

“You’ve got to catch the money real fast or you will never find out where it’s gone,” says Brown. “In one case, I had to phone up a son who’d had his mother unknowingly sign over her bank accounts to him. Within days, the accounts were drained. I phoned the son and said ‘your mother wants her money back.’ That’s one where we did have to go court, and, yes, we got the accounts back.”

According to the New York City Elder Abuse Center, an estimated $2.6 billion is stolen from elderly Americans every year through financial exploitation. The growing number of elderly Americans, often living alone, isolated and separated from responsible family members, are easy targets for unscrupulous people who manipulate or deceive seniors out of their homes and life savings.

“Every case is different. It often involves complex family relationships, or a caregiver who takes advantage of the situation; it’s always slightly different. The reality is that financial exploitation of elders has been going on forever. There are just more elderly people these days and more cases of financial abuse,” says Brown.

“I have represented defendants where someone is making a claim that a gift was obtained improperly and in fact it wasn’t,” says Brown. “Several years ago my client was supposed to inherit a house. She had a friend she met in a doctor’s office where they were both going for treatment. The woman had no spouse and no children and she gifted the house to my client,” says Brown.

California has tough laws on elder financial exploitation and Brown’s client was accused of manipulating her friend into making her the heir. “She hadn’t done that, of course,” says Brown. “It was a true gift and we got her the house.”

More FINANCIAL ELDER ABUSE News
These are dangerous times to live in for seniors. By the time financial exploitation cases hit Phil Brown’s desk it’s too late. The exploitation has already happened and it’s his job to put it right.

However, Brown has a few thoughts for senior citizens to prevent things from ever getting to that stage. “Get a medical power of attorney and a financial power of attorney. Pick people you trust. If you have two people on your team, they can keep each other in check.”


Phil Brown is a graduate of Berkeley and U.C.L.A. Law, and a founding partner at Phil Brown Law in Beverly Hills, California. Brown is a litigation lawyer with expertise in a number of areas, including Elder Financial Abuse. He founded the Law Students Civil Rights Research Council in California in the 1960s, and worked undercover with the NAACP in Louisiana and Mississippi in the summer of 1965.

Posted by
connie quade
on January 29, 2014
You are so right Stephen. The laws are in the perpetrators favor. My sisters are bleeding my mother dry! I have tried for more than 2 years to get this to stop. Adult Protective Services, lawyers; all doors slamming in my face!! The laws are not strict enough and the resources for this to stop are few to none. In the mean time my youngest sister doesn't work, just purchased a new car for her 17 year old daughter, new car for 20 year old son and one for herself, made numerous expensive home improvements. I'm sure when the money is gone my sisters will inform me it's my turn to take care of mom; but for now my contact is restricted. Seriously; the laws are more strict for abusing an animal than they are for our own parent!!!!!
Posted by
Stephen Bass
on November 25, 2013
My story and experience involving ELDER ABUSE. Read ELDER ABUSE IN THE USA THREE TAPS for Olga. Enter that title into Google Search. Now you will understand why Elder abuse will never be stopped. I tried and tried to prosecute my case and lost again and again. ATTORNEY NEEDED!!!!!!!