A New Jersey man recently sued a business that sells vaping products after an exploding e-cigarette allegedly shot flames down his pants and left him physically and emotionally scarred from the explosion. 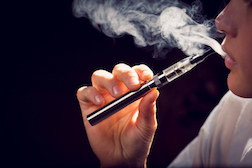 E-cigarettes are handheld devices that use lithium-ion batteries and heat to vaporize a flavored liquid that typically contains nicotine and other ingredients. The device produces an aerosol that's inhaled into the lungs.

Many e-cigarette manufacturers market vaping devices as being a safer alternative for cigarette smokers. However, consumers have reported numerous e-cigarette products as being allegedly defective or dangerous. Barrese claims in his lawsuit that his e-cigarette battery exploded without warning in his pocket.

"William Barrese quickly realized that his leg was covered in black residue and his skin was severely charred," according to the lawsuit. "The explosion resulted in extensive burns on his lower extremity."

Barrese's alleged e-cig explosion was "not a novel occurrence," according to the petition, which referenced additional consumer injuries, including a New Jersey man who allegedly suffered second degree burns to his arm and face as a result of an e-cigarette explosion and a separate incident involving a Camden County woman.

More News
The woman allegedly suffered catastrophic injuries to her mouth and teeth, "almost losing her right eye" when an e-cigarette exploded in her face, according to the complaint. In another incident, a southern New Jersey resident required a skin graft after suffering extensive burns to his leg and foot, according to the lawsuit.

Twenty-five separate incidents of explosion and fire involving an e-cigarette were reported in the US media between 2009 and August 2014, according to a 2014 report by issued by the US Fire Administration.

E-cigarettes with lithium-ion batteries can behave like "flaming rockets" when a battery fails, according to the same report.