Warnings from researchers and health officials associating vaping and e-cigarette with the corona virus are escalating, coincidentally while Juul departs San Francisco HQ and downsizes to Washington, D.C. 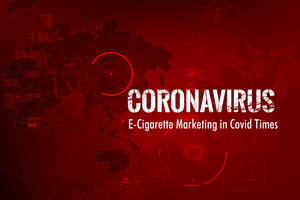 
Health officials have been warning people who vape for some time that they might be at a higher risk for complications from the coronavirus. Two months ago, a 22-year-old Brooklyn man had been hospitalized with a COVID-19 diagnosis. The man didn’t appear to have any pre-existing conditions but doctors knew that he had vaped, according to NBC News. Mayor Bill de Blasio told the press that, “We do think the fact that he is a vaper is affecting this situation,” but are young people listening to people urging them to quit or is their addiction to vaping stronger than these warnings? In the not-too-distant past, people who smoked cigarettes couldn’t kick the habit and died from lung cancer. But teens have been sold a bill of goods by companies like Juul, telling them vaping isn’t dangerous. Companies that put profit over people.

Warnings about an association and increased evidence of vaping and serious complications from COVID-19  also came from Dr. Nora Volkow, head of the National Institute on Drug Abuse (NIDA), who “strongly advises people who are vaping to stop.” As well, the American Lung Association’s chief medical officer, Dr. Albert Rizzo, and the American Nonsmokers’ Rights Foundation concurred.  And the warnings are global.

Information released by the World Health Organization from China shows that people who have cardiovascular and respiratory conditions caused by smoking or water pipes are at higher risk of developing severe COVID-19 symptoms. And last month NIDA took a step further, announcing that SARS-Cov-2 — the coronavirus that causes COVID-19 —could be an especially serious threat to those who smoke tobacco or marijuana, or vape, regardless of age.


Is it a coincidence that Juul is moving headquarters from San Francisco to Washington, D.C. and possibly laying off up to 950 workers? Or is it mainly because SF has consistently said no to vaping, and by leading the country in legislation, has forced the company out of the city?

One San Francisco Chronicle reporter opines that now is the best time for teens to stop vaping. “With Juul packing its bags and taking a smaller team to its new home in Washington, D.C., there is an opportunity for parents to talk vaping with their teens,” wrote Danielle Ramo. “As I read the recent headlines announcing Juul’s plan to conduct massive layoffs and move its headquarters out of state, I can’t say a big smile didn’t appear on my face.”

She went on. “On behalf of parents across the country, I can only hope that Juul’s future in Washington, D.C., is short-lived. As a researcher in teen substance use, one of the top questions I’m asked is how parents can talk to their kids about vaping — and my first tip is to talk openly about it, approaching the topic with a frame of curiosity rather than accusation or anger, even if you suspect your teen may be vaping. I always recommend using news in the world of vaping to provide a good opener for conversation.”

More E-CIGARETTES HEALTH HAZARDS News
Some of that news that might interest teens is how Big Tobacco supports vaping. Altria, one of the largest tobacco companies, bought a third stake in Juul in 2018 for more than $12 billion. Altria Group Inc, is the Marlboro cigarette manufacturer. Ironically, Howard Willard, the chief executive of Altria, was diagnosed with COVID-19 in March. Altria has written down the value of its $12.8 billion investment in Juul by about $8.6 billion due to bans on e-cigarettes following a surge in teenage vaping and reported health-linked concerns, reported Reuters.

Ramo suggests that you ask your teen what the motivation might be for a tobacco company to buy a vaping-device company. And why is Juul moving to the nation’s capital? If you need more help to get the conversation going, the American Heart Association and All Mental Health partnered with Hopelab to build a new resource, Talk Vaping With Your Teen.

Now is the time to discuss vaping. If the fear of COVID-19 isn’t enough to pack in e-cigarettes, what is?