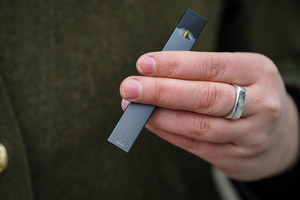 
In 2014, when she was Canada’s Health Minister, Ambrose said that, "Currently, without scientific evidence demonstrating safety or effectiveness, we continue to urge Canadians against the use of these e-cigarettes.” She went on. "We have heard that e-cigarettes may be a gateway for teens to begin smoking, while also having the potential to serve as a smoking cessation tool."

Juul has been blamed by some regulators and public-health advocates for hooking teens on nicotine. Juul says it has never marketed to minors. Some critics would say her statements are rather hypocritical.


In January Juul said it would stop selling most of its flavoured e-cigarettes in Canada but no such action has been taken. “By refusing to pull flavored vaping products off the Canadian market as it said it would months ago, Juul has demonstrated quite clearly that, like tobacco companies, it cares more about profits than kids or public health,” said Cynthia Callard of Physicians for a Smoke-Free Canada.

Juul announced Ambrose’s position in May, with its CEO, CEO K.C. Crosthwaite, stating that Ambrose’s “unique public health and regulatory experience” can help the company reposition itself.

“Rona’s unique public health and regulatory background will provide oversight and expertise as we continue to reset the vapor category and work to earn the trust of our stakeholders,” said Crosthwaite, adding  that she will be a key asset in aiding Juul with establishing a license to operate and build their “product advantage.”

Ambrose said that there is a need for businesses and regulators to work together to combat underage use and eradicate cigarettes, according to CTV News.

Ambrose is up against Canadian regulators who want tighter regulations, and there is tough opposition in the U.S. Juul is being investigated by at least 39 states and the FDA over allegations of predatory marketing practices that include targeting youth. Cities and school districts have filed lawsuits and the giant e-cigarette company must submit an application for U.S. authorization of its products by September 9.


In December 2019, current Canadian Health Minister Patty Hajdu announced new measures aimed at deterring the use and promotion of e-cigarettes, stressing serious health risks to youth. Among the changes were mandatory health warnings on packaging and limits on nicotine content.

To mark World No Tobacco Day in May, Hajdu announced nearly $4.8 million in funding for organizations across Canada to develop programs and services that will help stop tobacco use among Canadians, and reduce youth vaping. "The new measures will help, but there is more to do…We are working on further steps to protect youth and our message remains clear: vaping comes with serious risks,” Hajdu told CTV News.

More E-CIGARETTES HEALTH HAZARDS News
Canadian provinces from coast to coast oppose Juul. Nova Scotia's health minister said the province will be the first to ban sales of flavored e-cigarettes and juices, and Ontario is considering a similar move. Other Maritime provinces and British Columbia have adopted new vaping restrictions. For instance, P.E.I. passed legislation that raised the legal age to buy tobacco and e-cigarettes from 19 to 21. And British Columbia has a 10-point plan aimed at protecting youth from the health risks of vaping, including legislation that caps the nicotine concentration in e-liquids and hiking tax on such products from seven per cent to 20 per cent.

“In her new role, Rona Ambrose has an opportunity to protect Canadian kids from a lifetime of nicotine addiction and potential tobacco use,” said Les Hagen of Action on Smoking & Health.  “We challenge the former health minister and her fellow Juul board members to demonstrate their sincerity in wanting to curb youth vaping…”