Recent consumer complaints about exploding electronic cigarettes (e-cigarettes) have prompted people allegedly injured while "vaping" to file lawsuits after suffering burns when the devices blew up in their faces or exploded inside clothing.

Send your Exploding E-Cigarettes claim to a lawyer who will review your claim at NO COST or obligation.
GET LEGAL HELP NOW

E-cigarettes are handheld devices powered by lithium-ion batteries that vaporize a flavored liquid usually containing nicotine and other ingredients into an aerosol inhaled into the lungs. E-cigarettes are often marketed as a safer alternative for smokers of traditional tobacco cigarettes. However, consumers have reported numerous e-cigarette products as being allegedly defective or dangerous. 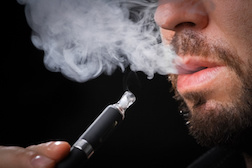 Twenty-five separate incidents of explosion and fire involving an e-cigarette were reported in the US media between 2009 and August 2014, according to a 2014 report by issued by the US Fire Administration. The shape and construction of e-cigarettes can make them more likely than other products with lithium-ion batteries to behave like "flaming rockets" when a battery fails, according to the same report.

In 2014, 12.6 percent of US adults had tried an e-cigarette and roughly 3.7 percent of adults used e-cigarettes daily or on some days, according to the Food and Drug Administration (FDA).

The FDA in 2016 extended its regulatory authority over all tobacco products to include electronic cigarettes (E-cigarettes), vaporizers, vape pens, hookah pens, e-pipes and all other electronic nicotine delivery systems (ENDS). FDA regulation includes components of ENDS but excludes accessories.

The Wall Street Journal reported in 2016 that users of exploding e-cigarettes have filed dozens of lawsuits in New York, Florida and California as well as in other states.

Two Florida men filed lawsuits in 2016 against several e-cigarette makers and retailers, claiming that the ENDS devices exploded and injured them in separate incidents. The plaintiff in one lawsuit, James Dardinia, suffered second and third degree burns when a vaporizer allegedly exploded without warning in his front right pocket, caught fire and engulfed his leg in flames.

In the other Florida lawsuit, James Lauria alleged that an e-cigarette vaporizer exploded in his mouth while he was vaping. The explosion allegedly punctured the palette in Lauria's mouth and left a "gaping hole all the way through to his nasal cavity," jamming teeth through his gum, fracturing teeth and burning his hand, according the complaint.

The explosion also allegedly broke Lauria's hand and C-5 vertebrae, burned his face and chest area and scratched his left eye from flying debris, according to the lawsuit.

In September 2015, a Riverside County Superior Court jury awarded Jennifer Ries, who was badly burned when a charging e-cigarette battery caught fire in her car, nearly $1.9 million after she sued the distributor, wholesaler and store where she bought the exploding vaping devices, according to the Los Angeles Times.

The US Food and Drug Administration is currently reviewing the safety of e-cigarettes.

If you or a loved one has suffered similar damages or injuries, please fill in our form and your complaint will be sent to a Personal Injury lawyer who may evaluate your claim at no cost or obligation.
Please click here for a free evaluation of your Exploding E-Cigarettes claim
Last updated on Nov-26-19

Posted by
Sue Wilson
on March 10, 2018
Scott Currie -- It was a battery in your pocket that exploded, not an e-cig, so you need to sue the battery company, not the e-cig manufacturer. 3.7v lithium batteries are used to power everything from flashlights to cameras. You should never carry any batteries in your pocket uncovered, since there is a very tiny but not-zero likelihood that, as in your case, a piece of metal such as a coin or key could touch both poles at the same time and close an uninsulated gap at both ends and cause thermal runaway, or exploding battery.
All batteries are little bombs. They are a metal case around a cell for storing energy. "Battery safety" is a thing.
Posted by
Paula Bianca lim
on January 28, 2016
I was smoking my ecig while driving. I exploded and caused a 2nd degree burn on my right calf. I went to the hospital and was told I am unable to work for a week.
Posted by
Scott Currie
on January 20, 2016
Had a extra 3.7 Volt Lithium battery in my pocket for a e-Cigarette system it exploded while in my pocket. Causing a fire and 3rd, second degree burns to my thigh, can send pictures of the mess it caused to my leg
Posted by
RLD
on November 3, 2015
Is big tobacco behind this post, just like the other anti-vaping propaganda? I see nothing mentioning the 10 (or more} deaths, as well as thousands of injuries due to the Bic lighter for instance. That is one brand - ALONE!

That doesn't include the millions of cheapo disposable lighters that have been sold in the same time frame. So please anti-vaping big tobacco... STOP with the child's play, do what's best for your fellow man - not your pocketbook.