Uninsured patients who visit ER rooms are reportedly being hit with hospital emergency room overcharges, meaning they are paying far more for medical care and services than other patients are. Barry Kramer, of the Law Office of Barry Kramer, says uninsured patients do not have someone negotiating a discounted rate for services, and as a result end up being charged much more for hospital services than those services are worth. Kramer says he has seen clients who have had bills of between $5,000 and $10,000 for only a few hours stay in a hospital emergency room, often with little or no benefit. Those clients were unable to pay their bills and sought his help. 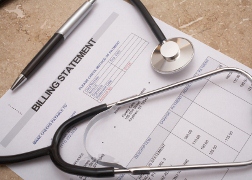 “Hospital ERs provide a common contract that everyone signs, but which doesn’t set out the specific charges,” Kramer says. “So an uninsured patient, even if he asks, has no idea of what his charges will ultimately turn out to be. He doesn’t find out the bad news until he leaves the hospital.”

According to Kramer, “Hospitals invariably claim that everyone is charged the same, which is simply untrue. Only uninsured patients are required to pay the hospital’s gross charges. Literally everyone else gets huge discounts.”

The problem has been particularly unfair to uninsured patients who are capable of paying their inflated bill, but faced with the choice of paying an unreasonable and inflated bill or confronting the hospital’s collection department and ruining their credit. Many of these patients found themselves uninsured either because they recently lost their job or were in the process of changing insurers, or simply felt the insurance costs were too high. For such patients, paying an unreasonably hefty hospital bill did not help their financial situation, but they were forced to do so because they could not afford to defend a lawsuit or have their hospital bill go to collections. What they paid, unfortunately, was often up to five times the amount that other patients paid for similar services.


“We are looking for patients who are uninsured, received an undiscounted bill from a hospital, and paid all or most of that bill,” Kramer says.
“For example, a patient might have cut his finger, waited two hours in the emergency room, received 10 minutes of treatment, and then been hit with an inflated bill of $1,200. If the patient begrudgingly paid the bill rather than face a legal battle or collections, he would be entitled to a refund to the extent of the overcharges.”

For people confronted with a hospital overcharge, an individual lawsuit is rarely feasible, given the costs and complexity of filing such a suit. Furthermore, few individuals have any understanding of hospital billing practices, which are largely hidden from the public. Thus, the cost of a lawsuit and access to billing information is more easily handled in a class-action suit.

Uninsured patients who have received care at a major hospital’s emergency room in the past three years and have paid all or most of their bill may be eligible to file a lawsuit against the hospital.

More EMERGENCY ROOM CHARGES News
“There is a limited group that ends up damaged or injured by these Charge Description Master billing practices,” Kramer says. “The bottom line is that emergency room billing for uninsured is based on an unconscionable rate structure, which insured patients, Medicare patients and Medicaid patients don’t have to pay.

“Even the hospital contracts signed in an emergency room setting are deceptive, since they never explain the fact that an uninsured will be required to pay far more than others for the same services. It's a tainted system, and it works unfairly. Unlike other patients, uninsured patients have no rate structure agreed on in advance, and only after uninsured leave the hospital do they get hit with an exorbitant bill.”

Posted by
Mark
on February 20, 2019
I just want to see if this is worth my time. Why is there not a class action suit against hospitals for over charging patients and insurance.

Here is what I mean, I had an accident on a 2 wheel motor vehicle. I broke or fractured my collarbone and and 2 or 3 ribs, it may have been 4 but they don't reset those, I also punctured a lung slightly, they did insert a tube to reinflate it but it was no big deal, I didn't really even feel the lung issue.

Anyway, the admitted me for 4 days even though the nurses seemed to think I was pretty ok, and I kept telling them I was ready to go home, well, by the 4th day one of the nurses said I could insist that they release me and I did, reluctantly they did, well, 4 days in the hospital racked up a $40,000 bill and that was just the hospital not counting all the many doctors that asked for a cut which I'm not even sure ever saw me..

Anyway, I called them and they did reduce the bills, I am self-pay.

I also had a hospital visit through the emergency room at another hospital several years before that and they cut the bill immediately on checkout 89%, so it actually cost me less than someone who has insurance that has to pay 20% when I only had to pay 11%.

Isn't this price gouging. It obviously doesn't cost the hospitals as much as they charge and I'm not sure that insurance companies are actually paying as much as they say they are.

Why isn't this a class action suit against the hospitals and insurance companies?

If you think this could lead into something that is worth my time, I will be happy to give you my full name and work this out with you, but if not, its no big deal.