Hospital Overcharges Up in the Air 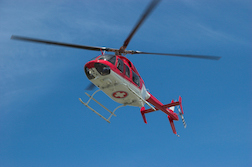 The air transport company (it has several names including Rocky Mountain Holding Co., Native Air and Air Methods) is involved in about 22 legal actions, according to Ruidoso News.

A New Mexico woman has filed the latest medical overcharges claim against this company. She had a heart attack and was flown from New Mexico to a Texas hospital that has a catheterization laboratory, apparently because all the cath labs in her state were full. Her medical insurance covered all hospital fees and the air ambulance with a $100 deductible so imagine her surprise when she was billed $60,000 for the flight.

After appealing her insurance company’s denial, it paid one-third, but she was still on the hook for the remaining $40,000. So she appealed again, and again, to no avail. Next up she called the New Mexico Attorney General’s office and filed a complaint against Rocky Mountain Holdings. She was then told that Rocky Mountain Holdings “is not a corporation in good standing in New Mexico...They are looking into Presbyterian [hospital] about why they are calling this company.” Could the hospital be getting a kickback?

Not only does the air transport company overcharge a flight. Apparently it even tries to collect from patients after their insurance company pays them – double dipping! This company has cashed in on a loophole—the deregulation of air fares. So the outcome of these lawsuits will prove interesting. Charging this woman $60,000 “may not be illegal, but it certainly is unethical,” she told Ruidoso News.

More EMERGENCY ROOM CHARGES News
Last year the medical transport company Air Methods Corp., which is the same company as Rocky Mountain Holdings, was slammed with a $5 million class action suit in South Carolina, alleging its inflated pricing scheme overcharges patients who needed to be airlifted to hospitals. One of those patients is former OSU basketball coach Tommy Wade, who was billed $38,000 for a 20 minute helicopter ride to ER when he had a heart attack. The complaint claims that, “Instead of charging patients a uniform, customary, and reasonable rate, defendants seek to charge higher prices that bear no reasonable relationship to the services rendered or what is customarily charged for the services… generally many times the actual cost of providing care.”

But wait, it gets worse. Last year April Breck’s mother was involved in a car crash—an ambulance speeding to a call crashed into their car. An air ambulance was called but Sheila died before it arrived. A week later April was mailed a bill for $25,000—their “base rate”.

Emergency responders and pilots deserve a decent pay rate. Add to that gas and helicopter maintenance, etc. But these overcharges are outrageous and the patient suffers in the end. Unless they prevail in medical overcharges lawsuits.

Posted by
Lisa Bredefeld RN BSN LNC
on January 11, 2017
A previous Flight Nurse/Paramedic for a service based in NM. An ER Nurse for over 20 years in Connecticut, and most recently, a patient with an enormous amount of over billing from Yale New Haven Health.
I get it. The big picture.
Posted by
W Ashley Smith Jr
on December 9, 2016
I find it comical that the press (and apparently the legal community) can't see the bigger picture. Are the rates that helicopter operations charge too high? A little. But they are not as high as you think given the totality of the issue. What never seems to make the press is the number of missions completed when the patient pays nothing. Or the number of missions completed that are paid by Medicare or Medicaid, that is less than half the true cost of the mission. This system is no different than what the hospitals have forced to do over the years, charge those that can pay more to compensate for those that can't. Insurance does that every day, yet no one seems to have any issues with that process.