According to a classification system employed by the federal drug regulator, Effexor is a "Category C" drug, which is to say that it may or may not cause birth defects. The latest data as of 1999 "is inconclusive, either because no studies have been done or because any adverse effects that have been demonstrated have shown up in animal rather than human studies," reports having-a-baby.com. However, one need only spend Two Hours With Matthew to realize there are troubling issues surrounding Effexor birth defects and other side effects. 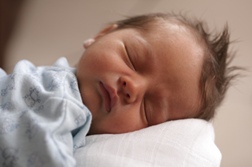 Two Hours With Matthew is a blog, a Facebook page and a movement intended as an educational tool and a tribute to Matthew Schultz, who was born February 21, 2009 and lived just two hours.

When Matthew was born, his parents were startled to see that his skin was purple. Attending staff at the hospital told them "not to worry," but it wasn't long before the baby started vigorously crying and went into distress. As Matthew began to turn blue, hospital staff tried in vain to save him. It was later discovered that Matthew was born with persistent pulmonary hypertension of the newborn (PPHN). His mother, Christiane, took Effexor throughout her pregnancy.

According to the Two Hours blog, psychiatric drugs have caused 1,031 abortions, miscarriages and other infant deaths over the past four years. The US Food and Drug Administration's (FDA) Medwatch amassed 647 prenatal and neonatal adverse event reports for Effexor alone. Only a small percentage of cases are ever reported.

In 2004 the FDA issued a safety communiqué with regard to use of Effexor and other Serotonin and Norepinephrine Reuptake Inhibitors or SNRIs, and Selective Serotonin Reuptake Inhibitors (SSRIs) late in the third trimester of pregnancy. SSRI and SSNI use in women at this stage in their pregnancy was found to pose a greater risk of delivering an infant with "complications requiring prolonged hospitalization, respiratory support, and tube feeding. Such complications can arise immediately upon delivery."

Six years later this concern has been bolstered by new research, published this March in Pediatrics. The study suggests that babies of women who take antidepressants like Effexor during the latter part of pregnancy are slower in reaching some developmental milestones.

More EFFEXOR BIRTH DEFECTS News
According to Consumer Health News, researchers looked at data from more than 81,000 babies born in Denmark. Overall the infants' progress remained within the bounds of normal development, but the children of women who took antidepressants during the second or third trimester lagged behind other infants by 16 days in sitting unaided, and started walking an average of 30 days later.

There is also the possibility that Effexor can affect a child through the mother's breast milk. In a revised medication guide dated April 2004, Effexor manufacturer Wyeth cautions nursing mothers that venlafaxine (Effexor) can be "excreted in human milk. Because of the potential for serious adverse reactions in nursing infants from Effexor, a decision should be made whether to discontinue nursing or to discontinue the drug, taking into account the importance of the drug to the mother."