Effective February 6, a change in FDA policy banned sales of fruit, mint and dessert-flavored vape pods that were reportedly intended to attract teens. The effectiveness of this ban in protecting young consumers from e-cigarette health hazards remains in doubt, however. The ban does not affect menthol or tobacco-flavored pods, open-tank systems and thousands of flavored e-liquids not in pod form, including a disposable brand called Puff Bar that comes in flavors such as strawberry, cool mint and mango. 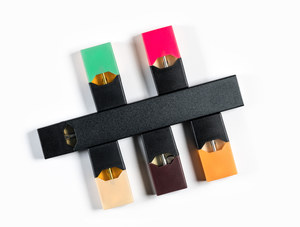 In the meantime, plaintiffs continue to file consumer protection lawsuits that focus on the harm already done by marketing that aggressively targeted minors. Some suggest that these campaigns were designed to guarantee a future market for nicotine delivery systems, including e-cigarettes, by introducing consumers to a highly addictive substance early in life.


ARE EXCEPTIONS THE RULE?


Plans for restricting e-cigarette flavors on a federal level first came up in September 2019, when national data indicated rates of vaping had more than doubled among 8th, 10th and 12th grade students. The administration announced plans for a sweeping ban. But by mid-November 2019, those plans had been considerably scaled back.

The restrictions do not affect JUUL, once the largest marketer of flavored vape pods. The company stopped selling mint-flavored pods in November 2019 and fruit-flavored pods in 2018. Some assert that teens have already moved on to other forms of nicotine consumption.

The ban is also temporary. Flavored products will be allowed back on the market if they receive premarket FDA authorization following further agency evaluation of the impact on public health. Eventually, all vaping products will need to go through the same premarket review process. Products not included in the FDA's ban may stay on shelves for up to a year while the agency considers their applications.

It is also not entirely clear how the administration intends to enforce the new batch of restrictions. Flavored e-cigarette pods are widely sold throughout the country in vape shops, convenience stores and small mom-and-pop shops.


The U.S. Surgeon General has reported that nicotine has more significant and durable damaging effects on adolescent brains than it does to adult brains. E-cigarette side effects include mood disorders and permanent reduction in impulse control, and use is linked to increased sensitivity to other drugs. Anecdotal evidence suggests that addictions acquired during teenage years are especially difficult to treat or manage.

In addition, e-cigarette usage has been linked to increase in mysterious, severe lung disease. As of February 4, the Centers for Disease Control and Prevention reports that there have been  a total of 2,758 cases of people who have been hospitalized with EVALI, or e-cigarette, or vaping, product use-associated lung injury.

On February 12, the Attorney General of Massachusetts filed a lawsuit against JUUL Labs and its corporate predecessor, Pax Labs, claiming that the companies have engaged in unfair and deceptive acts and practices in violation of Massachusetts law. The principal grievance is that JUUL willfully advertised and sold nicotine products to children, adolescents, and other consumers younger than the minimum legal sales age. Further, the complaint claims that JUUL’s misconduct has created a public health crisis and an epidemic of youth nicotine use and addiction.

Some of this is familiar territory. But some of the allegations concerning the overt targeting of children remain shocking. JUUL allegedly purchased banner and video advertisements on nick.com and nickjr.com, both of which feature shows and games from the Nickelodeon television network, which is a television network for children. JUUL also reportedly purchased banner advertisements on the Cartoon Network’s website at cartoonnetwork.com and other websites generally designed for children, including allfreekidscrafts.com, hellokids.com, and kidsgameheroes.com.

More E-CIGARETTES HEALTH HAZARDS News
Younger girls appear to have been the target audience for banner advertisements on websites, such as dailydressupgames.com, didigames.com, forhergames.com, games2girls.com, girlgames.com, and girlsgogames.com. Teenagers were apparently the target for advertisements on websites such as teen.com, seventeen.com, justjaredjr.com, and hireteen.com. This is not simply a matter of adventurous children and teens exploring material intended for an older audience. JUUL was seeking out children where their online lives happen.

The evidence of e-cigarette health hazards seems clear. The evidence that e-cigarette companies have targeted children is similarly convincing. The question is about effective legal remedies.

Massachusetts. v. JUUL Labs and other state lawsuits may actually prove to be the more effective way to combat marketing to children by e-cigarette manufacturers and distribution networks. The federal ban may ultimately prove to be more a matter of appearance than substance.

If you or a loved one have suffered losses in this case, please click the link below and your complaint will be sent to a consumer frauds lawyer who may evaluate your E-Cigarettes Health Hazards claim at no cost or obligation.
Request Legal Help Now

Click to learn more about LawyersandSettlements.com
LawyersandSettlements.com - A trusted, independent legal news provider bringing quality news and information on legal cases and lawsuits filed in the United States of America to its readers since 2002. Over 650,000 legal help requests including Consumer Frauds, Defective Product Cases, and Personal Injury Cases have been forwarded to lawyers all across to the country.