In the days and hours leading up to February 6, 2011, the Cardona family of Palmdale could have no idea that their lives were about to change dramatically, and not for the better. That often happens when a DUI (driving under the influence) incident finds you. As it turns out, almost $21 million dollars has also found the Cardona family, but for reasons that have more to do with justice than good fortune. 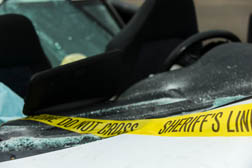 According to court records, plaintiff Jose Cardona and his wife, Irene, were out driving on the 6th of February 2011. Their adult son Eduardo was riding in the back. The trio was driving southbound along 47th Street E. in Palmdale, at a speed somewhere between 15 and 20 miles per hour (MPH) when their car was violently struck in front by an SUV coming the other way. The driver of the northbound vehicle, Galdino Cortes, was alleged to have been driving under the influence. The Cortes vehicle crossed the center line of the roadway and collided head-on with the Cardona vehicle, coming the other way.

Cortes, according to the police investigation and a biomechanics expert called to testify at the resulting trial, was traveling at about 50 MPH when the collision occurred.

All three occupants in the Cardona vehicle suffered serious injuries. The elder Cardona, 59 at the time of the DUI collision, suffered serious injuries to his legs and knees and has been prevented from walking on his own since the accident. Cardona is capable of managing short distances on his own with the aid of a walker, but has to rely on a wheelchair for longer excursions. Doctors also identified late-onset cerebellar damage that was not obvious at the time of the accident, but has nonetheless left Cardona with symptoms including, but not limited to, headaches, tremors, slurred speech, dizziness, anxiety, depression, unpredictable mood, loss of concentration and memory problems. Cardona’s ongoing issues also include worsening dysarthria, which causes him facial numbness, tingling and difficulty swallowing.

The plaintiff has not been able to return to work in the welding profession since the 2011 DUI collision.

Irene Cardona, riding in the front passenger seat, was also seriously injured in the crash and suffered a traumatic brain injury that has left her with persistent headaches and blurred vision, together with various other physical injuries that remain an issue years after the DUI collision. Irene Cardona was left with a complex injury to her right wrist that now encompasses her right arm and shoulder. The pain, at times is so debilitating that it causes her to lose consciousness at times.

Despite riding in the back seat, Eduardo Cardona also sustained serious injuries in the drunk driving collision, which included a rupture to his abdominal wall that required emergency surgery. In addition to the abdominal injury, Eduardo suffered lacerations to his chest, bruising on his legs, swollen ankles and anemia due to blood loss. An intestinal blockage following the original laparotomy required a second surgical procedure.

Eduardo, according to court records, had been attending trade school at the time of the DUI collision. The accident and the subsequent recovery forced him to take a leave from his studies and delay his graduation. Eduardo sufficiently recovered from his injuries to resume his studies, and since graduating in 2012 has been working full time in his chosen profession. However, the accident left him with a long, permanent scar on his abdomen and he still experiences abdominal pain.

More DUI/DWI News
His weekends are now spent at his boyhood home, caring for his parents.

Defendant Cortes did not dispute that he was driving under the influence at the time of the collision and admitted liability, but contested the nature and extent of the plaintiff’s injuries and the value of their losses.

In the end, all three members of the Cardona family who were injured in the collision were awarded various economic and non-economic damages for pain, suffering, loss of income and future medical care, as required. The total award was $20,968,903.

If you or a loved one have suffered losses in this case, please click the link below and your complaint will be sent to a dui & dwi lawyer who may evaluate your DUI/DWI claim at no cost or obligation.
Request Legal Help Now

Just close your eyes and imagine for the next 50 or 60 years, you might be confined to a wheel chair or see blurred vision. Or maybe if you're younger - 80 years - of not being able to connect thoughts together and having to have assistance. What kind of price would you put on that? What would you monetarily accept for your health or lack thereof?

Walk a mile before you judge.

Posted by
Gail
on August 9, 2015
21 million is outrageous. That is what is wrong with the insurance companies. When is there going to be a ceiling on how much people get paid when they sue someone...