A Los Angeles Superior Court jury awarded $21 Million to three family members after a 2011 DUI car crash left them with injuries that will impact them for the rest of their lives. The family suffered severe fractures, lacerations, and lifelong pain when a drunk driver of a Ford Explorer crossed double yellow lines and struck the family’s Ford Taurus head-on. 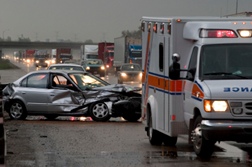 On Super Bowl Sunday 2011, the family was on their way from Palmdale to Los Angeles to drop their son off at his dorm room. “Their trip was violently cut short when a drunk driver decided to get behind the wheel of his SUV, lost control, crossed over into the family’s lane, and hit them head-on,” said attorney Alexander R. Wheeler. All three of the family members were rushed to Antelope Valley Hospital from the scene of the crash, where they received emergency medical care.

More CALIFORNIA CAR ACCIDENT News
During the 13-day trial, Plaintiffs called treating physicians, family members, friends of the family, and expert witnesses to testify on their behalf. The jury deliberated for two days, before arriving at their verdict, which was made up of lost wages, medical care costs, and damages for pain and suffering. “This is a great family whose lives were tragically altered as a result of this crash. The jury saw that great family and clearly understood that it is not just broken bones that make up a verdict but rather everything that is taken away because of those injuries,” said attorney Jason P. Fowler.

For 30 years, R. Rex Parris has devoted his practice to protecting the rights of injured people and aggrieved employees. Rex and his dedicated team provide thorough, high-quality representation with integrity and compassion. From motor vehicle crashes to class actions and defective products, these lawyers fight aggressively against corporate defense attorneys and insurance companies to ensure their clients get the compensation they deserve. For more information, please visit rrexparris.com.