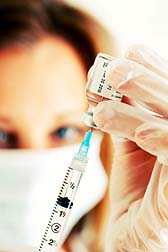 More drugs/medical News
GSK is the sole supplier of the H1N1 vaccine to Canada and has reportedly already shipped some 7.5 million doses of its Arepanrix to Health Canada. Health officials say that rate of side effects for all vaccine batches is 0.32 per 100,000 vaccine.

David Butler-Jones, the Chief Public Health Officer in Canada, said at a press conference earlier today that there are still 15,000 doses of vaccine from the suspect batch that have not been administered. The doses are being withheld from use while investigators try to determine the cause of the problem, which is not believed to be associated with the manufacturing process.

"What they're looking at is whether or not there was something else, whether it was something to do with when it was shipped," Butler Jones said, as reported by Bloomberg. "It gives us cause to wonder whether there's something wrong or it may just be the odds."

Importantly, the anaphylaxis reaction is not related to the booster vaccine, Butler-Jones said.