"This Noose is for You"

Even though the plaintiffs and the Nucor Corp Steel is slightly out of the firm's usual geographical area, veteran civil rights and discrimination lawyer Robert L. Wiggins says the facts of the case are so compelling that when the NAACP approached him, he took the case. 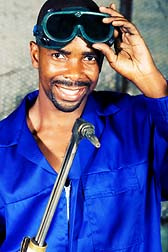 Compelling and shocking for the uninitiated. "We see this type of thing in other industries and other cases," says Wiggins, who represents seven African American men in a race discrimination suit against the Nucor Corp Steel located two states over in Huger, South Carolina. " Unusually, it was being broadcast on the radio, in the email system, it was just so out in the open."

Although Nucor Corp Steel adamantly denies that its plant is or ever has been a hostile work environment for blacks, two courts have already credited the testimony. According to documents filed and court records, white supervisors in the plant referred to black employees as "nigger", "bologna lips," and "porch monkey". The slurs were broadcast over the plant-wide radio system along with monkey noises. The confederate flag was displayed throughout the plant and sold in the plant's gift store.

Wiggins says that several e-mails that depicted black people in racially offensive ways, such as by showing them with nooses around their necks, were circulated by various employees. Once, an employee held up a noose and told a black co-worker that it was for him.

"They (Nucor) had a chance to get it right by putting systems in place that treat everyone equally, but almost from the beginning they had a subjective promotion system – and they let this racial abuse run rampant," says Wiggins.

What previous courts would not do was certify the complaint as a class action-- until now. "District court had found that each person would be impacted emotionally differently," says Wiggins. "We argued that is really not true. We argued that this type of racially charged hostility affects everybody the same way."

It is another victory for the seven black steelworkers who have been in a race discrimination battle with Nucor going back several years. "We expect Nucor will be intent on asking for a re-hearing," says Wiggins from the well-known firm of Wiggins, Childs, Quinn & Pantazis. "We will need to do some updating of discovery, because it has been now two years since the last declarations and affidavits were pulled together."

As for the seven plaintiffs, "one man resigned under pressure," says Wiggins. "Three others were fired and three continue to work at Nucor."

Wiggins says his clients have shown a great of courage in fighting back against Nucor and the men who remain on the job despite the ongoing court battles show amazing strength. "Many parts of the plants are quite isolated. They work at night with blast furnaces at 2000 degrees," says Wiggins. "It is a scary proposition to have such a thing going on. You are already a distinct minority and you are in parts of the plant where you are the only black person. It is very unsettling for these men."

More Civil Rights and Discrimination News
Wiggins is familiar with uphill battles. His represented Lilly Ledbetter in the 10-year pay discrimination battle with Goodyear Tire & Rubber. "The jury verdict was not upheld and Lilly ended up getting nothing but fame, no fortune. But it was good that the law got straightened out," says Wiggins. "We were happy to see congress turn that around and we are very proud of it."

Although the firm is best known for its race and sex discrimination work, it also handles pay and age discrimination suits as well as consumer product litigation.
"Some days I wonder what I am getting myself into," says Wiggins. "Some days it's a real rollercoaster."

Robert L. Wiggins is a name partner and shareholder in the firm of Wiggins, Childs, Quinn & Pantazis. He earned his J.D. at The University of Alabama School of Law, Tuscaloosa, Alabama (1974) and his B.A. at Clemson University (1971).

Click to learn more about LawyersandSettlements.com
LawyersandSettlements.com is an online news and information site for the general public and legal community. As a legal news resource, we have emerged as an independent & trusted voice. We provide detailed and quality information on various lawsuits filed including Civil & Human Rights Cases, and Discrimination Cases.